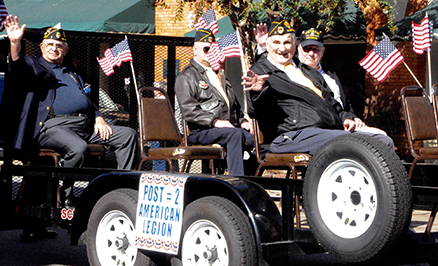 These members of American Legion Post 2 in Americus were proud to ride in the parade Friday in downtown Americus.

AMERICUS —  On a brisk and bright November Day, folks from all walks of life gathered at the Sumter County Courthouse to pay tribute to those veterans who have served the nation — in war and in peace. Willing to stand and wait in the cold morning air, hundreds watched as the military units, marching bands and local officials gathered behind the Courthouse for the parade through downtown Americus.
Presiding over the ceremony, and standing near the memorial to those fallen warriors who are honored in the stone monument on the Courthouse lawn was Chaplain Johnnie Pool of American Legion Post 558. After the presentation of the colors, the pledge to the flag, and the singing of the National Anthem, Pool gave an invocation, and introduced the speaker, Legionnaire Randy Goodman. Goodman thanked American Legion Post 2 and Post 558 for their support of veterans. He then gave a stirring and forceful speech in support of veterans — those who have gone before and those service personnel still serving. This brought a round of applause and salute to those serving in today’s military. Goodman encouraged those gathered to urge Congress to support veterans and active due service personnel.
Then Goodman spoke with special passion about the Viet Nam veterans and what they came home to — how they were treated. However, he noted, they could not focus on the treatment. They put the call to duty first, as he pointed out in this statement: Country-first; Mission-first; Comrades-first. They had their priorities in order. They served when their country called.
“Veterans are everywhere,” he noted, “and there are many ways to acknowledge their sacrifice. But the easiest is to say ‘thank you for what you have done.’”
It is not just about who fought the battles, he said, but who served in peacetime, also.
“Veterans will tell you,” he said, “that the best wars are those that are never fought.” But they are always ready, he said. Peace may come, as it did following World War II, and yet our soldiers were called up in a few short years to go to Korea. So, preparedness is part of what it means to be a soldier, to always be ready to serve, wherever you are called. He noted, too, that a soldier’s battle continues after he returns home, for he brings with him the memory of war, scars visible and invisible. A round of applause greeted his final remarks and he called on Pool to give the benediction.
A solemn occasion, observing the great sacrifices made by those who have served, then turned into a joyous one, as the swelling crowd poured out onto Lamar Street, behind marching troops, marching bands from area schools, and much celebration. It was, in fact, as American as apple pie. And that is always a good thing.