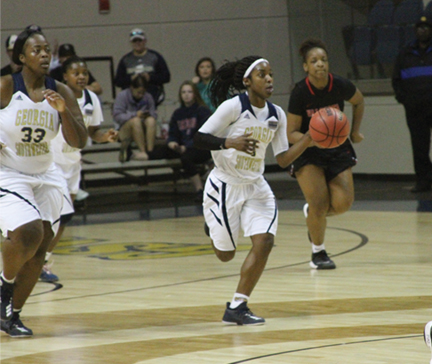 MICHAEL MURRAY I ATR: GSW’s Shaniya Jones drives down the court during the Lady Hurricanes’ Nov. 14 home opener against Valdosta State. Jones set the pace for the Lady ‘Canes in the win, contributing 12 points, three assists, and two steals.

AMERICUS – The Georgia Southwestern State University (GSW) women’s basketball team defeated number-eight-ranked Valdosta State 62-54 in front of 612 fans at the Storm Dome in the Lady Canes season-opener on Nov. 14.
The Lady Hurricanes were on fire as GSW shot 69.2 percent from the field (nine-of-13) to outscore the Lady Blazers 23-12 in the fourth quarter, erasing a two-point deficit that the hosts took into the final frame.
The Lady Canes (1-0) were able to spread the scoring around, led by senior guard Shanya Jones with 12 points, three assists and two steals. Sophomore transfer Mariya Trimble added 12 points, five rebounds and three steals, while Gabby Figgers, Brittany Grant, and Tyisha Moore scored nine points apiece.
GSW held the Lady Blazers to 34 percent shooting from the floor (18-of-53) while forcing them into committing 13 turnovers on the night.
Forward, Madi Mitchell, led 2017 Gulf South Conference Tournament Champion Valdosta State (2-1) with 18 points and nine rebounds, followed by Kenya Samone’ Dixon with 12 points, eight rebounds and three assists.
Trailing by nine points at the end of the first quarter and by 13 with 6:22 left in the third, the Lady ‘Canes went on a 34-13 run the rest of the way. A layup from Shanya Jones with 7:43 left in the game gave GSW its first lead of the night at 46-45. It was a lead that they wouldn’t give back. Jones and Brittany Grant each knocked down two from the line in the final minute to secure the win and open the season with a victory over the nationally-ranked Lady Blazers.
Mariya Trimble, a transfer from Chattahoochee Technical College came up big off the bench in her first regular season game. Trimble was five-for-six from the field, two-for-two at the line, and was a force in the final quarter with timely rebounds and a steal.
Gabby Figgers was a bright spot from the three-point line for the Lady Canes. The senior guard shot three-for-six from downtown while distributing six assists, grabbing two rebounds, and recording a steal.
The Lady Canes returned to the Storm Dome on Nov. 17 to face Albany State in the first of two games in the Peach Belt/SIAC Challenge. The results of this match-up were not available at press time.
On Nov. 18, the Lady Hurricanes will put their skills to the test against the Fort Valley State Lady Wildcats. Tip-off is scheduled for 7:00 p.m.