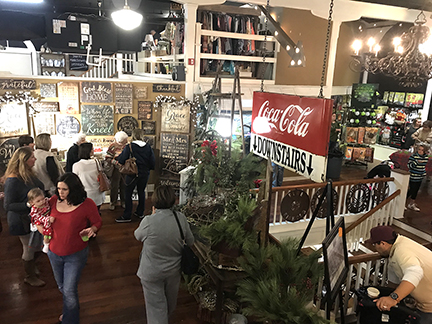 The Maze, in downtown Americus, was one of many of the shops and businesses welcoming visitors Thursday evening for the annual Downtown Christmas Open House which heralds the beginning of the holiday season in Americus.

AMERICUS —The City of Americus is on the list of finalists for a $500,000 makeover and national attention. After thousands of nominations from small towns all over the country, Deluxe Corporation announced earlier this week the 20 communities that are in the running for season 3 of the highly acclaimed Small Business Revolution – Main Street series.
At the end of September, Deluxe launched the second season of Small Business Revolution – Main Street, featuring the community of Bristol Borough, Pennsylvania, and six businesses selected to receive the $500,000 makeover. The series, which airs on www.smallbusinessrevolution.org, Hulu and YouTube, features marketing and business expertise for small businesses in one small town. Host Amanda Brinkman, Deluxe’s chief brand and communications officer, along with a host of marketing experts from Deluxe, help struggling business owners find their path to success.
Nominations were open from Sept. 28 to Nov. 19, with thousands of communities across the country vying for a chance to be featured in Season 3. Deluxe will gather more information from the top 20 communities before narrowing its list to 10 finalists to visit in the month of January. Eventually, five or six communities will be selected for a national vote to determine the winner.
Patrick Kay, director of Americus Main Street and Downtown Development Authority, sat down at Café Campesino in downtown on Thursday to discuss this exciting news and how to get the entire community involved in the process of winning.
He said that after the nominations process opened, a grassroots effort filled out the online surveys and sent them in. That process, in addition to him sending letters of endorsement and other data, put Americus on the top 20 list. The only other city in Georgia on the list is Cartersville.
The factors to be considered in making the top five list are, as described by Kay, the diversity of the business community in the downtown area, the existence of a business development organization, the coordination between the business sector and the community, the needs of the business community, the geographic location of the city, and the overall response from the community.
“If Americus were to win, Deluxe Corporation wants to come here and see lots of excited and enthusiastic people, from the entire community,” Kay said.
Kay is asking all the downtown businesses (there are over 100) to go online and fill out the surveys and to flood Deluxe’s emailbox. Businesses can send in the surveys until Dec. 4. Nonprofits are also eligible.
The next phase is the announcement of the top 10 list, which should be around Dec. 12. If Americus is named to the top 10, Deluxe’s team will visit the community in early January and members of the Deluxe team will spend about two days in each community to help determine the towns that will be eligible for final national voting in February 2018.
There is certainly enough evidence of the great things going on in Downtown Americus. Thursday evening’s Downtown Christmas Open House is the official beginning of the holiday season and it much anticipated each year. Kay obtained a grant for bistro-type string lighting to be strung in the alley behind the Windsor Hotel and beside the Allison building. The lights are compliments of Sumter EMC and the wiring will be done by Wayne’s Electric as in-kind. Seven new Victorian-style benches have been installed downtown, as well as new trash receptacles.
Other events that have taken off include the Hot Glass/Craft Beer Festival which will be held on April 7, National Beer Day, in 2018, and will feature at least 18 breweries and 10 portable glass-blowing furnaces. The Friday night free event will include more music and art to include the entire community.
First Fridays continue to be popular to lots of visitors but Kay encourages local citizens to come out and visit downtown on first Fridays to enjoy dining, shopping music and other arts. Starting with First Friday in December, only Christmas music will be played on the downtown sound system to help shoppers and visitors keep the holiday spirit.
A new event is coming in February. The Women’s Wine and Chocolate Walk is scheduled for the afternoon of Saturday Feb. 2, and will feature several downtown locations. Another new event for 2018 is Red, White and Blues, set for the first Saturday in June. The event features authentic blues music and barbecue completion for amateurs and professionals.
Kay said Deluxe is also tracking video shares of the video about Americus on the Downtown Americus Facebook page.
The ultimate winner, which will be featured in Season 3, will receive half a million dollars to overhaul six local businesses.
Deluxe, a leading provider of small business marketing and financial services, launched the Small Business Revolution – Main Street contest in 2016, and shared the inspiring story of Wabash, Indiana in Season 1. All eight episodes of Season 2 are now available online or on Hulu.