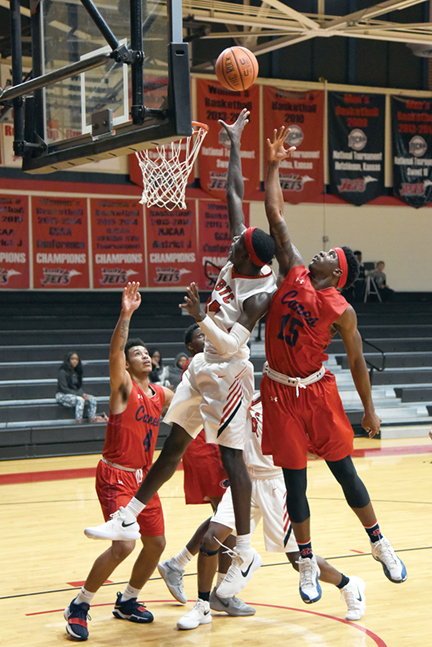 SUBMITTED BY SGTC: SGTC sophomore, Marquel Wiggins, goes up to guide the ball into the net. Wiggins was the leading scorer for the Jets in both weekend games, scoring 21 and 16 points respectively.

AMERICUS – The South Georgia Technical College (SGTC) Jets split a home weekend on Nov. 17-18, winning a close game on Friday night against Louisburg College and dropping the decision on Saturday night against Cape Fear Community College during the Region 17/10 Bash. The Jets are now 2-3 on the season, and are yet to open their conference schedule.
The SGTC men began the weekend with a 76-71 win over Louisburg College of North Carolina. The game started out slow for the Jets, who traded several lead-changes with the Hurricanes throughout the match-up. The Jets battled back just before the half to tie the game at 38-38, and would go on to outscore their opponent 38-33 in the second half to win by a margin of five points.
After the game, Jets head coach Travis Garrett said that the season is still early, but in order for his team to succeed, they will have to become more consistent on the court.
“I saw a lot of good things from the guys, and I saw bad things too,” Garrett said. “These guys are playing sporadically right now. At some points in the game they’re playing really well and doing all the right things, and at other points, they’re making mistakes. We need to play consistently for all 40 minutes of the game.”
On the night, the Jets made just 26 of their 66 attempted field goals (39 percent).
Marquel Wiggins, a sophomore forward from Oglethorpe, led the team in scoring with 21 points and 10 rebounds against the Hurricanes. The only other Jets to score in the double digits were sophomore guards Dawan Bass and Emeshuan Offord, who tallied 11 points apiece.
Also contributing to the score were sophomores Rico Simmons, Mike Boone and freshman Monte Greene (seven points each), sophomore Devante Foster (five points), freshman Adonis Green (four points) and freshman Durand Green (three points).
The following night, the Jets took the court to battle Cape Fear Community College from North Carolina. While the box score shows improvement from the Jets, they eventually lost 98-77 in an offensive display by the Sea Devils.
The Jets appeared to be more disciplined however, allowing fewer turnovers and personal fouls and also achieving a slightly higher percentage of shots made on the night (41 percent).
Four Jets scored in double digits, but it proved not to be enough to thwart Cape Fear’s big night.
The Jets looked to get back to a winning record over the weekend as they traveled to Ocala, FL for the Central Florida Thanksgiving Classic. The Jets faced St. Petersburg on Nov. 24. The results of this contest were not available at press time. The Jets return to action on Nov. 25, facing Central Florida.