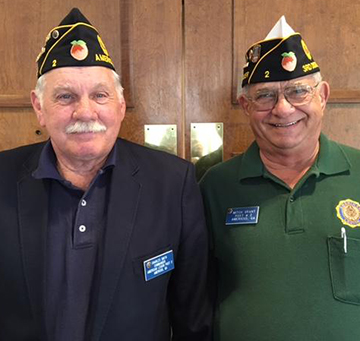 From left are Commander Larry Smith and Adjutant Mitch Grant.

AMERICUS — The American Legion Department of Georgia Fall Conference was held Oct. 21-22 in Duluth, Georgia. It was attended by local Commander Larry Smith and Adjutant Mitch Grant of the John D. Mathis Post 2 Americus.
It was a very successful and productive event. Much of Saturday was dedicated to Legionnaire Training. The Commander and Adjutant completed training in Communications/Public Relations, Judge Advocate/Adjutant Training and National Homeland Security. On Sunday, a Memorial Service was conducted in honor of our fallen Comrades.
Since its founding in Paris in 1919, The American Legion has been a steadfast advocate for American’s Veterans, a friend of the U.S. military, a sponsor of community-based programs for young people and a spokesman for patriotic values.

With millions of members, it is the nation’s largest Veterans group, with more than 14,000 local posts. It’s also the largest organization of the Gulf War, Iraq and Afghanistan veterans. Membership is open to all men and women who served honorably in the U.S. military during an official wartime period. For additional information about your local American Legion please contact Commander Larry Smith (229) 938-3113 or Adjutant Mitch Grant (229) 669-2220.