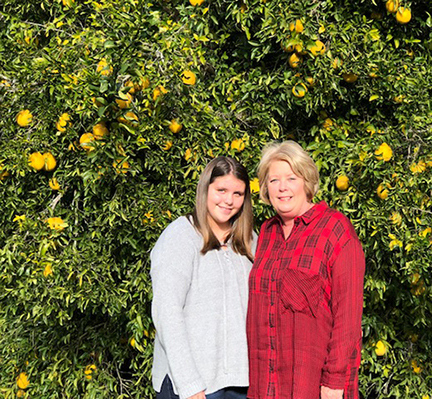 Ansley Lightner, at left, is shown with her grandmother, Lynn Lightner, in front of the giant Meyer lemon tree that has bearing lemons at a great rate every year for the past five or six years.

AMERICUS — When Lynn Lightner was given a small Meyer lemon tree by her father, the late Lint Law, about 18 years ago, she never dreamed it would become was it is today — a 22-ft. tree with branches ladened with big, beautiful fruit. Law had gotten the lemon tree from a friend in Florida.
When Lynn first received the tree, which was in a pot, she said it would produce two or three “little, tiny lemons” each year. She would often put a few decorations on the little tree as around Thanksgiving is the fruiting season for it.
After a while, Lynn said, her husband Bob decided to plant the tree in their deep back yard on District Line Road, “and ignored it.”
“It grew and grew,” Lynn continued, “until about five or six years ago, it started producing.” The Lightners have picked 1,000 lemons each year ever since, she said. Bob said they pick all they can use, share with family and friends and still lemons fall from the higher branches onto the ground below. She also mails her lemons to friends who don’t live in Georgia, she said. 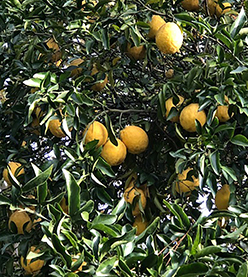 Lynn says she uses the lemons in lemon pie, lemon pound cake, lemon squares, lemonade and Bloody Marys. She added that she would like to learn to preserve the lemons. Her granddaughter, Ansley, also likes to cook and use the lemons. Lynn said the family eats a lot of seafood this time of the year and employ the lemons as flavoring.
During the week of Thanksgiving, the lemons are at their peak production and Lynn says they “keep so good.” In fact, the Lightner home has a pleasant, lemony scent wafting through it.
Bob was asked what he did to encourage the tree, and he said, “nothing.” He never fertilized it but kept it watered as he watered other plants and scrubs nearby. He said his grandchildren have always enjoyed picking the fruit from the huge tree. The season lasts about four weeks, he said, describing the fruit as “very seedy.”
Lynn says the tree has resulted in a couple of seedlings coming up nearby and they hope to transplant those to their farm in Schley County so they can continue the tradition after retirement.
According to thespruce.com, the Meyer lemon is sweeter than other lemons and sometimes has “an orange-like aroma and flavor.” The name comes from Frank B. Meyer, who reportedly identified the cross between the Eureka and Lisbon lemons and a mandarin orange in 1908. The skin of the Meyer does resemble some oranges.
The same source says that Meyer lemons have a “more floral taste” than others and a “slightly orange tint and flavor.”
The spruce.com also has some recommendations for using the Meyer lemon. They can be used in salads, for instance, and in pies, cakes, cookies, marmalade or curd, and of course in cocktails and other drinks. Lemon juice can also be frozen in quarts, cups or ice cubes. Lemon zest can also be frozen.
The Meyer lemon, according to the same source, can withstand cold snaps, “but not freezing temperatures.” Southwest Georgia appears to be the perfect climate, as exhibited in the Lightners’ backyard.
The Lightners generously sent this writer home with a bag of the beautiful fruit, about baseball-sized orbs, with one larger which bordered on softball size. They are scrumptious, even eaten just as an orange or tangerine.
There was a popular song of the 1965, recorded by Trini Lopez. According to Wikipedia.com, “Lemon Tree” was penned by Will Holt in the late ‘50s, and is based on a Brazilian folk song and made popular by Brazilian singer Wilson Simonal. It’s been recorded by numerous artists and “compares love to a lemon tree.” The lyrics say “Lemon tree very pretty, and the lemon flower is sweet, but the fruit of the poor lemon is impossible to eat.” NOT.
For more information about the Meyer lemon and how to preserve, visit https://www.thespruce.com/all-about-meyer-lemons-2216552