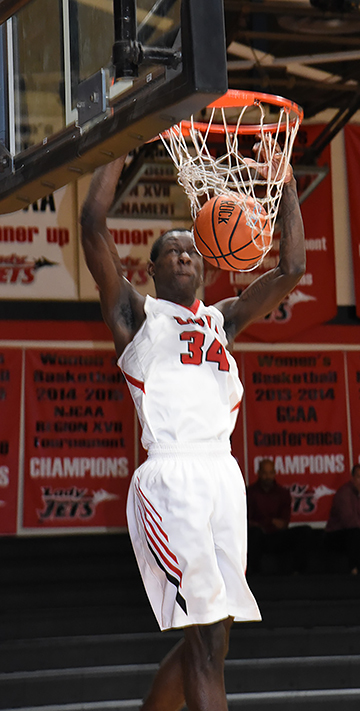 South Georgia Tech’s Marquel Wiggins (34) led the Jets to an impressive win over Tallahassee Community College in a 96 – 88 overtime decision over the NJCAA’s fourth ranked team.

AMERICUS — The South Georgia Technical College Jets upset the unbeaten, fourth-ranked National Junior College Athletic Association (NJCAA) Tallahassee Community College Eagles 96 – 88 in overtime in the Hangar on the South Georgia Tech campus in Americus as part of a double-header matchup with the Lady Jets.
“This was a total team effort,” said South Georgia Technical College Jets head coach Travis Garrett. “We did what we needed to do and I am so proud of the way this group never gave up. We got down but we kept coming back. Our free throw shooting made the difference in overtime.”
And prior to that impressive win by the Jets over Tallahassee Community College, the Lady Jets rolled to a 99 – 49 Georgia Collegiate Athletic Association (GCAA) conference win over Andrew College to remain unbeaten and in first place with a 5 – 0 conference record and an 11 – 1 overall record.
But the game of the night was the Jets’ big win over the previously unbeaten and number four team in the nation, Tallahassee Community College. The Jets jumped out to a 11 – 1 lead over Tallahassee early in the first half but the Eagles came back to pull ahead 36 – 35 at the half. That early 10-point lead was the largest one of the entire game.
The Jets and the Eagles seemed to trade baskets for much of the second half, but the Jets did fall behind by eight points twice in the second half before roaring back to tie the game at 79 – 79 at the final buzzer. The Jets outscored Tallahassee 17 – 9 in the five-minute overtime period to capture the 96-88 win and move to 5 – 5 on the season. Tallahassee dropped to 10 – 1 overall. There were 12 lead changes and 14 ties in the match-up.
“We did what we had to do in overtime,” said Garrett. “I would have liked to have finished them off in regulation play, but I was very proud of the effort that this team put forth and how they kept battling back in the second half.”
Sophomore Marquel Wiggins from Oglethorpe was one of the differences in the game. He finished the contest with 31 points, 20 rebounds, one assist, and one blocked shot. “Marquel did a great job under the basket and on the boards,” said Garrett. “He drew a lot of fouls from their big men, Corey Douglas, 6’ 9”, and Leon Freeman-Daniels, 6’ 4”, who both fouled out.”
Assisting Wiggins in that big victory was another sophomore, Rico Simmons. The 5’ 9” guard from Wilkinson County scored 17 points and did an awesome job on the foul line. He also had three rebounds and five assists. Simmons was eight of eight from the foul line and Wiggins knocked down 10 of 15. Wiggins was eight of 10 in the second half and Simmons was six of six from the foul line in the last 25 minutes.
In the opening game of the double-header, the Lady Jets started out very slow. They were up 15 – 12 at the end of this first quarter. They stepped up their point production in the second quarter slightly to pull ahead 39 – 23. The real difference came in the second half with the Lady jets posted 60 points in 20-minutes to capture their fifth consecutive conference win and their seventh win on their home court. The Lady Jets only loss this season was to Hillborough Community College in Florida, 88 – 82 on Nov. 19 in their sixth game of the season.
Esther Adenike led the Lady Jets in scoring in the conference match-up against Andrew. She had 25 points, 12 rebounds, three assists, and two blocked shots. Five other Lady Jets also wound up in double-figures in this contest. Freshman forward Ricka Jackson had a total of 17 points, seven rebounds, and three assists. She was three of four from the three-point line.
Another freshman forward, Fatou Pouye contributed 14 points and had 11 rebounds, freshman Alyssa Nieves tossed in 11 points, and then Houlfat Mahouchiza and Bigue Sarr both came up with 10 points.
Freshman Aubry Maulden and Sceret Ethridge both had five points. Kayla Holmes closed out the scoring with two points.
Both teams will be on their home court on Dec. 16. The Lady Jets will host Santa Fe College at 2 p.m. in the first half of a double-header and then the Jets will host Coastal Alabama-Monroeville at 4 p.m. Both teams will then break for the Christmas holidays and return to action at home on Dec. 29. The men open the Jets Holiday Classic with a 2 p.m. game against Wake Tech on Dec.  29. The Lady jets will follow up with the Lady Jets Holiday Classic with a match-up against Cape Fear at 8 p.m. that night. On Dec. 30, the Jets come back with a 2 p.m. game against St. Petersburg College and then at 8 p.m. the Lady Jets will play Gulf Coast Community College, the top-ranked team in the nation. The Lady Jets will face East Florida College at 3 p.m. on Dec. 31.