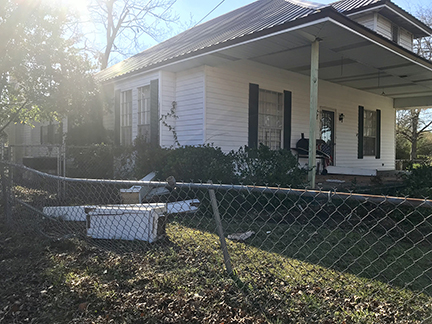 This is the house where the truck crash occurred in the 700 block of Felder Street.

AMERICUS — A driver with a vivid imagination was jailed after crashing his truck into a residence and fleeing police, leaving his son at the scene.
According to a report from the Americus Police Department, while on patrol shortly after 11:30 p.m. Thursday in the area of Bell Street, the officer, Printavious Powell, observed a 1986 Dodge D150 truck without a tag light. When the officer turned his patrol car around and turned on its emergency lights, the driver ran the stop sign at Bell and Harrold Avenue. The driver continued through another stop sign at Bell and South Lee Street, then making a right turn onto East Hill Street. The driver turned on his headlights and continued driving, and speeding through “multiple stop signs on East Hill Street.”
At that point, according to the report, the officer turned off his emergency lights and heard a loud noise. He found the vehicle in the yard of a house in the 700 block of Felder Street, with a small fire underneath the truck. The truck had crashed through a chain link fence on the west side of the property, continuing into the yard, running up on the porch and striking a metal handrail. The truck continued down the porch, striking three wooden columns that were holding up the porch. The truck partially drove off the porch, striking another chain link fence on the east side of the property. The officer called for the fire department.
About that time, the officer noticed a black male running behind a nearby residence dressed in all black. He observed the male juvenile running away from the burning vehicle into oncoming traffic. The officer got the juvenile out of the roadway and tried to calm him. The 11-year-old juvenile told the officer the truck’s driver was his father and he was unsure why he ran.
After the fire was extinguished, and the truck towed, officers tried to contact the juvenile’s family. He was taken to the police station and a short time later, they got in contact with his grandmother and she came and picked him up.

Meanwhile, officers contacted the boy’s father, Antoine Smith. Smith told them he was on Lonnie Lane and had been held at gunpoint in his vehicle. Smith told them while he was driving his grandfather home, he was waved down by an unknown black make who drew a gun and told him to move over and started driving the truck.
Smith told police that when the officer turned on his emergency lights, the driver began to flee and held Smith and his son at gunpoint. Once the truck crashed, the man ordered Smith out of the vehicle and to run with him or he would shoot Smith and his son.
Smith asked to see his son and was brought to the police station where he changed his story, admitting he was driving the truck. He was charged with three counts of failure to stop at stop sign, driving while license is suspended or revoked, reckless conduct, failure to maintain lane, striking a fixed object, fleeing and attempting to elude law enforcement officers, and tag light requirements. He was taken to the Sumter County Jail.