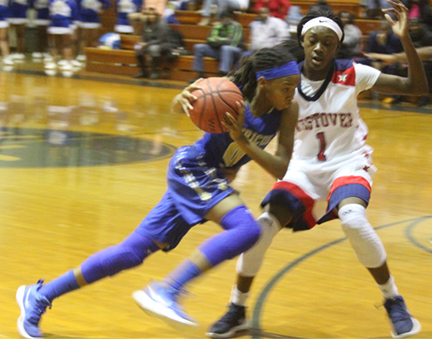 ALBANY – The Lady Panthers came into Saturday night’s region game against Westover wanting to rebound after Friday night’s 69-51 loss to Carver. However, the game came down to free-throw shooting. The Lady Panthers were unable to make free throws when it counted.  Westover junior forward Chastity Prickett made several free throws down the stretch, helping Westover hand Americus-Sumter a 51-45 defeat. It was the Lady Panthers’ second region loss in a row.

“We were 2-8 from the free throw line in the fourth quarter and 9-20 in the game”, Americus-Sumter Head Coach Sherri Harris said. “We work on free throws. We shoot 100 free throws every day. Maybe we should shoot 200.” Another factor in the loss was that the Lady Panthers gave up too many second-chance opportunities. ” We play good defense, but we gave up entirely too many second-chance shots”, Harris said.

The first quarter was a back-and-forth affair with both teams matching each other with baskets, however, the Lady Panthers had the edge at the quarter’s end 13-10.

However, the Lady Patriots went on an 11-2 run in the second quarter to take the lead 21-15 with a little over three minutes to go. With 3:02 to go, Westover junior guard Daysha Polite was fouled and made two free throws, giving the Lady Patriots a 23-15 lead. Then with 1:34 to go in the first half, junior guard ShMya Jones nailed a three-pointer for Westover, and the Panthers trailed by 11.

Americus-Sumter was able to cut into the lead to start the second half as they scored the first four points of the game, capped off by two free throws by Jykiera Long. The Lady Panthers cut Westover’s lead to five when sophomore forward Brianna Pope scored, forcing Westover Coach L.C. Smith to call a timeout.

Westover ended the run when Chastity Prickett drove to the basket and scored, increasing the lead back to 7 at 30-23. A couple of  minutes later, Westover junior guard Jasmine Jenkins created a steal and went all the way to score, giving the Patriots a 34-24 lead.

However, with 3:27 to go in the third, Jykiera Long nailed a three-pointer to give the Lady Panthers hope, cutting their deficit to 36-28 and forcing another timeout from Westover.

Americus-Sumter turned up their defense in the third quarter, going to full-court pressure, but the Lady Patriots were able to break it. The Lady Panthers cut their deficit further wen senior forward Tykiera Long scored to make the score 36-30 Westover.

Then with under a minute to go in the quarter, the Lady Patriots used full-court pressure against Americus-Sumter, but the Lady Panthers broke the press and sophomore forward Brianna Pope scored on a layup, cutting Westover’s lead to 36-32 by the quarter’s end.

However, ShMya Jones gave Westover a 7-point lead on a three-pointer to start the fourth quarter, then Prickett scored on a layup. Just like that, Westover was back up 41-32. The Lady Panthers went on a 4-0 run to cut the lead to four, capped off by a basket from Pope. Deasia Ford had a chance at the free-throw line to cut the lead to two for the Lady Panthers, but missed both shots. Then with a little over three minutes left in the game, a defensive break down by the Lady Panthers allowed junior center Shamya Loman to score uncontested, giving the Lady Patriots a 43-37 lead.

The Lady Panthers got back in it with 2:03 to go when Jykiera Long hit a three-pointer, cutting Westover’s lead to 43-40. However, Jasmine Jenkins was fouled and made both free-throws on a one-and-one to increase the lead to 45-40. Brianna Pope scored and was fouled to cut the lead to three, but she was unable to make the free throw. Then with 1:16 left, Chastity Pricket was fouled and made one of two free throws, giving Westover a 46-42 lead.

The Lady Panthers would not go away though as freshman guard Nyja Carson scored on an in-bounds pass to make the score 46-44 Westover with 50 seconds to go. The Lady Panthers tried full-court pressure to get a steal, but were forced to foul Prickett, sending her to the line. Prickett made both free throws, putting the Lady Patriots back up by four with 30 seconds left.

With 26.8 seconds to go, Nyja Carson was fouled, sending her to the free throw line for a one-and-one. However, Carson missed the first free throw and Westover got the rebound with 24.8 seconds left.

On the Lady Panthers’ next possession, Deasia Ford was fouled while shooting, but could only make one free throw. With 16.9 seconds left, Prickett was fouled again and made both free throws. Americus-Sumter couldn’t score on their next possession and Westover closed out the game with a 51-45 win.