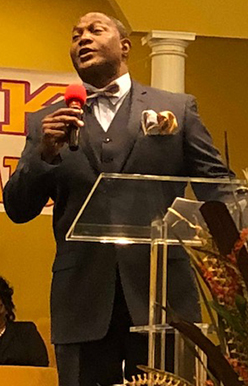 Deacon Dwight Harris served as master of ceremonies for the 2018 program.

AMERICUS — An enthusiastic crowd gathered Monday at Friendship Missionary Baptist Church to observe the birthday of the Rev. Dr. Martin Luther King Jr., who was assassinated 50 years ago.
Deacon Dwight Harris emceed the impressive event. He opened with “God is our only hope for complete community unity.”
Harris said that even though we have our differences, from various races, cultures, backgrounds, that our smiles speak the same language. Harris demonstrated that point well, sprinkling humorous stories throughout.
Kourtney Latimore Shelley gave the welcome and occasion and prayers were offered by the Rev. Arthur Fulton. The Rev. Mark Scott, who is also chief, Americus Police Department, read scripture from Isaiah 55:6. Greetings were offered by Dorothea Scott of the Americus-Sumter County Remembrance Committee, Americus City Council member Darryl Dowdell, state Rep. Bill McGowan, D-Americus, and state Sen. Greg Kirk, R-Americus. 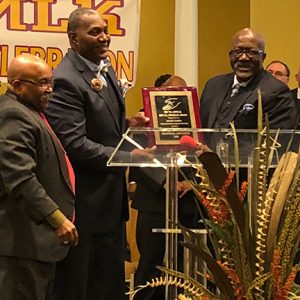 Dwight Harris is the 2018 recipient of the Rev. R.L.Freeman Servant Leader Award. He is shown at center with the Rev. Mathis Wright Jr., at left, and the Rev. Eugene Hal..

Dowdell highlighted the accomplishments of King during his lifetime and his legacy. McGowan said we have the power to do good for one another and advised to “keep going forward.” Kirk said it is time to get back to teaching our young men responsibility to finish school, get jobs and support their families.
Glorious music was provided throughout the program by the United Holiness Mass Choir under the direction of Prurince Dice.
The Rev. Mathis Wright Jr., president of the Americus-Sumter County Chapter of the National Association for the Advancement of Colored People (NAACP), introduced the keynote speaker, Americus native Kent Hill, formerly an NFL standout for the Los Angeles Rams.
Hill spoke of the NAACP’s role in removing barriers, but he said there is also a need to remove “our own internal barriers we set up in ourselves,” such as insecurity and self-doubt, lack of self-confidence. “We need to help each with encouragement.” 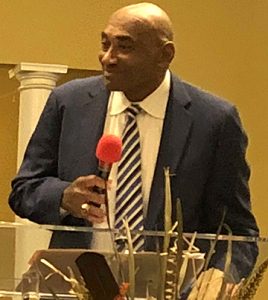 Americus native Kent Hill was the keynote speaker at this year’s King program.

Hill, looking back to his childhood, recalled being the only black student at Cherokee Elementary School during the time of free choice in schools. He said he felt isolated but during his school days he would come across other black people: in the lunchroom as well as janitorial staff, who would offer him encouragement.
He also recalled being a 16-year-old student at Americus High School in 1973 when he encountered Principal Richard Fussell and Head Coach Alton Shell in the hallway one day. The two men asked Hill why he wasn’t playing football, so he did. Later, after a home game, he said a man in the parking lot stopped him and praised his performance and also encouraged him to continue to play and get a college scholarship, something that had never occurred to the young Hill.
He did just that and attended Georgia Tech. During his freshman year, a coach encouraged him to continue playing and to play for professional league. Three years later, he was in L.A. and he found an encouraging coach after the second preseason loss. He said Charlie Young lifted him up when he was filled with negative thoughts and self-doubt. Later Hill would be the only rookie starting in a Super Bowl.
“How many times do we have the opportunity to be Charlie Young to someone else,?” he challenged the audience in closing.
Hill, who graduated with a degree in industrial management from Georgia Tech, was named to Georgia Tech’s All-Time Football Team in 1992, and inducted into the Georgia Tech Hall of Fame in 2006. He was a first-round draft choice for the Los Angeles Rams in 1979. He received multiple recognitions during his nine-year professional football career, and since. He has always given back to his community, founding the Kent Hill Foundation to support a youth development program in Americus. He is also managing partner of a successful business, Kent’s Country Cookies, based in Atlanta.
Presently, Hill is a project director, facilitator and speaker with The Pacific Institute, based in Seattle. 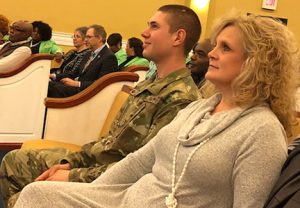 Jeremy Kirk and his mother Roslynn KIrk are shown in the audience as their father and husband, state Sen. Greg Kirk, R-Americus, was on the program. Emcee Dwight Harris recognized Jeremy Kirk and thanked him as he begins his military service as an Army Ranger.

Another program highlight was when it was announced that Dwight Harris is the recipient of the Rev. R.L. Freeman Servant Leader Award for 2018. In making the announcement, the Rev. Eugene Hall said that the late Freeman was a “patriot in the Sumter County area,” and someone who worked diligently for improvement and change for mankind.
In choosing the award recipient, Hall said the committee doesn’t try to pick the best person but an outstanding person in the community. “We all know that our message to our future is our children. … The attention that we pay to our children … What we expose our children to. … This year we chose someone who has taken an interest in our children and is dedicated to all our children, white children and black children … all children.”
Harris, who is CEO and founder of the Dwight Harris Boys Club the Sumter County Basketball League, appeared shocked and surprised at the announcement. He was so humbled he had no words except, “thank you.” Later in the program, he did recall having seen Kent Hill as a child and tossing him a football, and stressed the importance of positive thought over negative expectations. Harris’ programs have touched the lives of many boys and young men in Sumter County/
The Zeta Phi Beta Sorority (Zetas) and Alpha Kappa Alpha Sorority (AKAs) were also present for the program. Both are national service organizations for college-educated women. The Zetas celebrated their 98th birthday on Tuesday. The AKAs celebrated their 110th birthday on Monday.