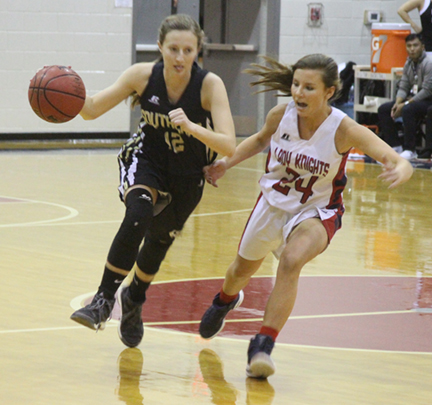 ALBANY – The Southland Lady Raiders (14-3) went on an 11-0 run in the second quarter and a 9-0 run in the third quarter to dominate the Lady Knights on their way to a 48-34 win over Deerfield-Windsor.

The teamwork that the Lady Raiders displayed in this game was excellent as they were able to pass the ball through the Lady Knights’ defense to find easy shots on the inside. Southland also played well defensively, limiting the Lady Knights’ chances to score. “We played a really good game for probably three and a half quarters. We felt like we were in control”, Southland Head Coach Ty Kinslow said. “They (Deerfield- Windsor) put a lot of pressure on you. I was proud of our girls for handling pressure. We moved the ball. We probably had as many assists tonight as we’ve had all year. We saw the open man. We swung it, attacked, and made some great passes inside. The key was handling their pressure, and overall, a great defensive game for us again.”

The Lady Raiders had balanced scoring as Cassie Bass led the way with nine points. Three players: Macy Williams, Calyn Fort and Savanna Banks each had eight points. Holly McCain also chipped in six points in the winning cause. Deerfield-Windsor was led in scoring by Destiny Reed with 10 points.

The Lady Raiders jumped out to a five-point lead to start the game, capped off by a three-pointer from Cassie Bass. A few minutes later, Southland built a 7-point lead at 9-2. However, the Lady Knights made a short, 4-0 run, capped off by a basket from Emilee Foy. The Lady Raiders were able to respond as they held Deerfield-Windsor to a 13-8 deficit by the end of the first quarter.

Southland jumped out of the gates quickly to start the second quarter by scoring four unanswered points, forcing a timeout by Deerfield-Windsor. The Lady Knights were held scoreless until the 5:30 mark when Patsy Cartee was fouled while shooting and made both free throws, making the score 17-10 Southland. Kingsley Shepard was able to score on the inside for Deerfield-Windsor, cutting Southland’s lead to five. However, Southland went on a 9-0 run to build their lead up to 26-12 with a little over two minutes left in the half. During this run, Bass hit the second of her two three-pointers in the first half.

Southland increased their lead to 16 when Bass passed the ball to Holly McCain on the inside. McCain scored to give Southland a 28-12 halftime lead. One reason for the Lady Raiders’ big lead was their ability to get second-chance offensive rebounds.

The Lady Raiders struggled offensively coming out in the second half as they turned the ball over several times in the first minute and a half. This resulted in a long scoring drought for Southland. During this time, the Lady Knights scored five unanswered points. However, the Lady Raiders finally got the offense going as they went on a 9-0 run, capped off by a three-pointer by Kathleen Kinslow. At this point, Southland enjoyed a 37-17 lead. Both teams traded baskets for the rest of the third quarter, but Southland still enjoyed a 41-23 lead to start the fourth.

The fourth quarter was pretty much an evenly-played quarter as both teams traded baskets. With three minutes to go in the game and Southland leading 48-28, the Lady Knights scored 6 unanswered points. By this time, however, the Lady Raiders were in total control and there was no doubt about the outcome. With the win, Southland improves to 2-0 in region play, having defeated Tiftarea Academy 42-32 last Friday night. They will try for their 15th win of the season when they host Valwood Friday night at 6:30 p.m.