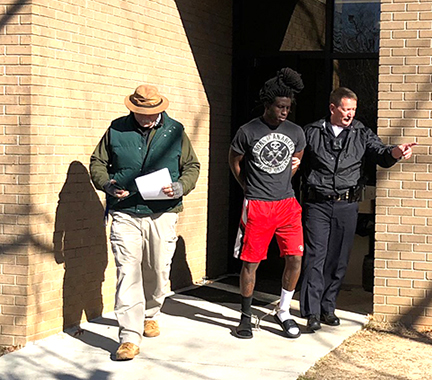 Murder suspect Devonte Watts is flanked by Maj. Richard McCorkle of CID, Americus Police Department, at left, and APD Lt. Mark McCardle who was shift supervisor the night of the killing. Watts was being taken to the Sumter County Jail Wednesday afternoon.

AMERICUS — On Wednesday, authorities zeroed in on a suspect in the 2014 shooting death of a four-year-old girl. They got him.
It was at 3:13 a.m. Dec. 30, 2014, when officers of the Americus Police Department responded to a shooting incident at a residence in the 800 block of Georgia Avenue. Several shots had been fired through a window of the house with one of the rounds striking four-year-old Assata Snipes, who was sitting in her mother’s lap, having her hair brushed at the time. The child was taken to a Macon hospital where she died later that day.
At the time of the incident, there were no suspects identified. But since that time, the Americus Police Department and the Georgia Bureau of Investigation Region III Office have actively worked to identify the person responsible for the little girl’s death.
That investigation culminated on Wednesday, Jan. 17, 2018, with the arrest of Davontae Terrell Watts, 24, of 220 Mitchell St., Americus on one charge of felony murder and four counts of aggravated assault related to Assata’s parents and her five-year-old sister, who were all in the house at the time of the shooting.
Americus Police Chief Mark Scott, in a press conference Thursday morning, said that Watts had been identified as the suspect through a combination of forensic evidence obtained at the scene and interviews with witnesses and acquaintances of all parties. At the time of his arrest, Watts was also being sought on outstanding warrants for failure to appear in court on charges of armed robbery and aggravated assault from the September 2016 robbery of a local pawn shop. He was taken into custody on Wednesday in a rural Sumter County residence where he had recently moved. He was taken to the Sumter County Jail.
Calvin Mansfield, an investigator for the Southwestern Judicial Circuit District Attorney’s Office, and Special Agent Terry Howard of the GBI’s Region 3 Americus Office, were also at the press conference.
The police chief said this arrest hopefully gives some closure to the child’s family.
“They’ve been an active part of this investigation from the very beginning,” he said. “They have cooperated fully and have constantly requested updates … on how the investigation has progressed. Hopefully now that we know who did this, they can have some closure.”
Howard of the GBI, who was present when the Snipes family was informed of the arrest, said the family was excited when they were informed of the arrest.
The police chief said this is an ongoing investigation and they are still seeking information from the public which may aid in the prosecution of this case or in the identification of additional suspects.