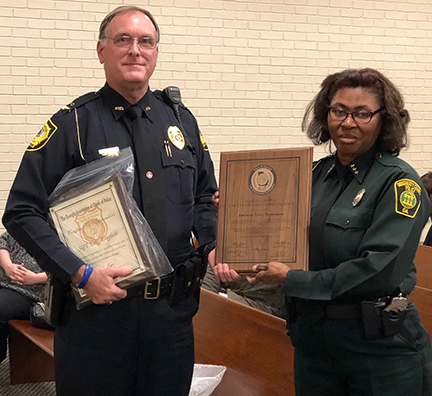 AMERICUS — Americus Police Chief Mark Scott accepted a plaque at Thursday’s meeting of the mayor and city council. This represents that the department is an official certified police department. Scott accepted the award, on behalf of the department, from Dougherty County Police Chief Jackie Battle, district representative for the Georgia Association of Chiefs of Police.
Sgt. Eric English, an investigator, was also recognized as the APD’s state certification manager, for his outstanding job in the review process.
In October 2017, a three-member team visited the Americus Police Department. They reviewed files and talked with various personnel, and were taken on a tour of the city by the local police chief in the process of obtaining state certification.
Bruce Carlisle, chief of police in Lavonia, served as team leader for the State Certification Program, which governed by the Georgia Association of Chiefs of Police in conjunction with the Georgia Sheriffs Association. Carlisle also serves as the chair of the State Certification Committee.
He explained what state certification is.
“It’s a progressive and time proven way of helping law enforcement agencies review and improve their overall performances,” he said. “The foundation of certification lies in the development of standards contained in a clear statement of professional objectives.”
He said that the Americus Police Department has developed those standards (numbering 129). The agency must meet those standards or they can receive a waiver if they don’t do one of the functions. For example, Carlisle said, here in Americus, the police department doesn’t hold prisoners at the department, so they can get a waiver, “and a few other minor things they’ve gotten a waiver on.”
The three-member team spent a full day going through files at the Americus Police Department to make sure they have the standards in place and have policies that meet each standard, “to say that the agency is going to comply with that standard … from this point forward.” 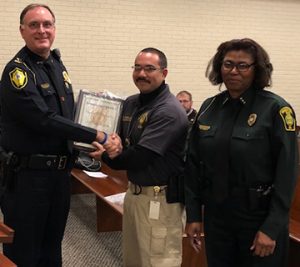 Sgt. Eric English of the CID, Americus Police Department, was also recognized for being instrumental in the certification process.

Carlisle pointed out that this is the Americus Police Department’s initial certification, “so from this point forward, this is what they’re going to do.” In three years, he said, another set of assessors will come in and “make sure that for the past three years that they’ve done what they said they were going to do.”
Carlisle said it’s his understanding that the Americus Police Department will continue their professional standards and the achievement of national accreditation. “The three years will become four then,” he said.
Carlisle also explained the benefits of being a certified agency.
“It confirms that the agency practices are consistent with progressive, professional standards; greater operational and administrative effectiveness; enhanced understanding of professional policies and practices; greater public confidence in the agency; recognition in the field of outstanding achievement; greater governmental and community support.”
The State Certification Program has been around since 1990, Carlisle pointed out, and “caught a lot of traction” in about 1996.
Carlisle also praised the local police chief.
“Chief Scott’s been here a year and seven months, and it’s pretty phenomenal … usually for an established chief, it’s two years. Him coming in as a new chief and to get certified in a year and seven months is a big deal … He’s to be commended for that … They’re all to be commended. If you don’t have the buy-in from your department, you’re apt to fail. We can tell by looking at the files that we do have buy-in,” he said.
There are over 650 law enforcement agencies in the state; of those, about 123 are state certified, according to Carlisle. There is no mandate for state certification; it’s something that agencies choose to do in order the reap the benefits.
The Americus Police Department was state certified in 2003, but lost certification in 2008, according to records found in the department’s files.