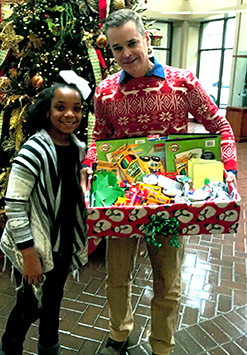 Jamariah L. Wilson, 9, of Americus was given a vision a few months ago to provide items to some needy children for Christmas. After discussing with her mother and grandmother, she agreed to donate to the pediatric wing at Phoebe Putney Memorial Hospital in Albany. Donating to Phoebe Putney was extra special to Jamariah because she was born there in 2008. Her mother and grandmother assisted her with purchasing crayons, coloring books, scribble pads, coloring pencils, note pads, candy canes, and toys. Jamariah said she just wanted to put a smile on some children faces during Christmas. On Dec. 15, she and her mother delivered items to the hospital. Jamariah is the daughter of Mr. and Mrs. James and Lannelle German-Wilson. Ben Roberts of Phoebe Putney is shown with her.