Hurricanes lose two in a row with loss to Flagler 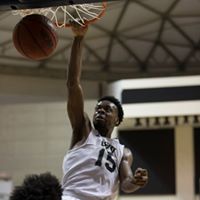 GSW Sr. forward Hasaan Buggs dunks the ball against Columbus St. He had 21 points and 11 rebounds in the loss to Flagler.

St. Augustine, FL – GSW forward Hasaan Buggs notched another double-double with 21 points and 11 rebounds, but it was not enough as Flagler guard Damerit Brown scored a season-high 27 points to lead the Saints to an 88-67 win over the Hurricanes.

GSW has now lost two consecutive games. With the loss, the Hurricanes fall to 9-5 overall and 5-5 in the Peach Belt Conference.

Brown was on fire for Flagler, shooting 9-for-17 from the field and making 7-of-10 three-pointers. Six of those three-pointers came in the second quarter.

The Hurricanes only led twice in this game, and the Saints took the lead for good on a Brown three-pointer with 14:44 to go in the first half. A few minutes later, Flagler went on an 8-0 run to take a 25-15 lead. The two teams traded baskets for the rest of the half and Flagler maintained a 39-31 lead by halftime. The Hurricanes were never able to cut into Flagler’s lead in the second half.

Three other Hurricanes scored in double-figures. Devin Watson and Andre Statam each scored 12 points, while Jason Weaver scored 11. R.J. Sessions came into this game averaging 14.6 points per game, but was held to only nine points, 10 rebounds and four assists.

GSW will try to end its two-game skid when they take on Augusta University on Saturday at 2 p.m. in Augusta, GA.