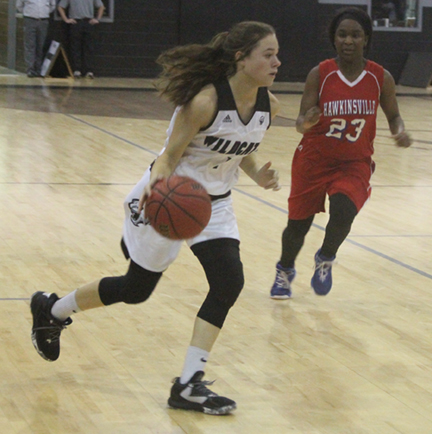 ELLAVILLE – The girls game between Schley County and Hawkinsville featured two struggling teams. Hawkinsville, winless on the season, was desperate for a win. Schley County came into this game with their own struggles, having won only won four games all season. Something had to give. The deciding factor would be Schley County’s 14-3 run in the third quarter, which put the game away and gave the Lady Wildcats a 61-23 route over the Red Devils.

“We picked it up in the second half”, Schley County Head Coach Cliff Royal said. “In the first half, we didn’t play a really good game. We just missed shots. In the second half, we made our shots and made our free throws. We played team ball.”

With the win, Schley County improves to 5-11 overall and 5-7 in region play. Hawkinsville is still winless on the season.

The Lady Wildcats got on the board first when Emily Campbell hit a three-pointer. Both teams played hard and with intensity, forcing each other to commit turnovers. There was no scoring from either team until Hawkinsville’s Markesia Doe was fouled with just under four minutes and hit one free throw. Both teams struggled to score for the remainder of the first quarter, but Schley County had an 8-4 lead by the quarter’s end.

Schley County went on a 6-2 run to start the second half, capped off by a three-pointer by Emily Campbell. However, about a minute later, the Lady Wildcats were up 36-17 before De’ovian Taylor hit a three pointer for the Lady Red Devils, cutting their deficit to 36-20. However, late in the third quarter, the Lady Wildcats used full-court pressure to force Hawkinsville into committing turnovers. Schley County turned those turnovers into points, opening up a 45-20 lead by the end of the third quarter.

The Lady Wildcats continued to pour it on in the fourth quarter. With just under six minutes to go, the Lady Wildcats got back-to-back three-pointers by Carmen Philips and Darden Campbell, making the score 56-20 Schley County. The Lady Wildcats scored seven more points to finish out the game with a 61-23 victory.