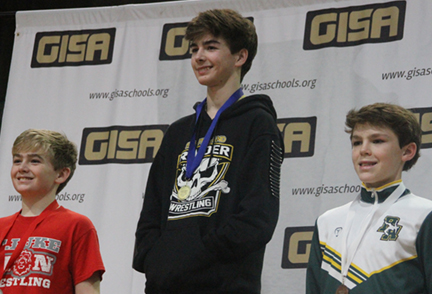 AMERICUS – Last Saturday, middle school wrestlers from all over the state came to Southland Academy to compete in the Georgia Independent School Association (GISA) Year-End tournament.

As a team, the Raiders performed well, finishing in second place behind champions Bulloch Academy of Statesboro. The Raiders had one champion, five second-place finishers and one third-place finisher.

Fifteen weight classes were represented in this tournament. In the 98-pound weight class, the Raiders’ Tanner Humphrey took home the gold for Southland when he defeated Brooks Lawson of St. Luke’s Academy in the championship match. “I am happy I came this far”, Humphrey said. “It feels good to be a champion.”

Landon Griffin, Johan Garcia, Kolden Kinney, John Saye and Ryan Exum each finished in second place in their respective weight classes. Not to be outdone, Cayce Joyner also had an outstanding showing for the Raiders. He pinned Alex Gee of Valwood in the consolation round and finished the tournament in third place in his weight class. 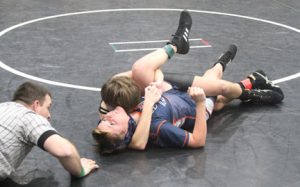 In the semifinal round, Garcia Pinned Ben Becker of Bulloch Academy. Though he lost in the championship round to Coe Leavengood of Westfield in the 120-pound weight class division, Garcia was happy with his overall performance. “I’m proud of what I’ve done. I’m wrestling on varsity this year and next”, Garcia said. “As far as the match is concerned, I wish I could have beaten him (Leavengood). I’m not sure what happened.”

In the 72-pound weight class, Ryan Exum defeated his opponent from Westfield in the semifinals to get to the championship. Exum’s strategy for winning was pure and simple. “I had a good stance and I kept my head up. That was pretty much it”, Exum said.

Exum lost to Kameron Clark of Robert Toombs Academy in the championship round, but had an excellent showing, finishing in second place.

Kolden Kinney made it all the way to the finals in his weight class before losing to Cade Beecher of Pinewood Christian. In spite of the loss, Kinney brought home a silver medal for Southland.

“I’m very proud to be able to work with such a fine group of young men”, Southland middle school wrestling coach Josh Hicks said. “They’ve worked hard all year. They exceeded our expectations. I’m very proud of what they have done.”