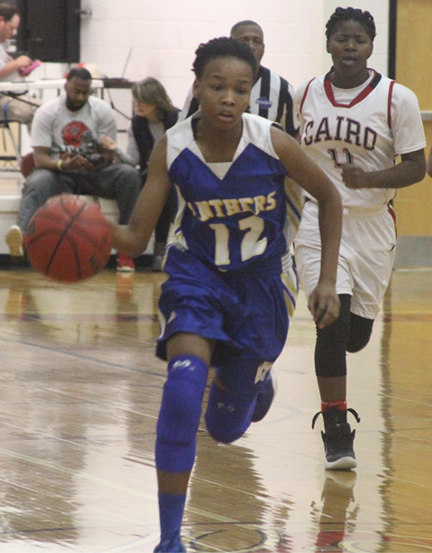 CAIRO – The Lady Panthers came into former Olympian Theresa Edwards’ old stomping ground ready to stamp out their four-game losing streak. They did just that by using high-pressure defense and being patient on offense to secure a 54-42 victory over the Lady Syrupmakers.
With the win, Americus-Sumter improves to 15-5 overall and 5-4 in GHSA Region 1-AAAA play. They are currently in third place behind Westover and Carver, with a sub-par Hardaway team coming into Americus Friday night.
“We executed our half-court offense, I think, pretty good…something new we’ve been putting in. It worked pretty good”, ASH Head Coach Sherri Harris said. “We knocked a few minutes off the clock. We did it to take the other team out of what they were trying to do offensively. We frustrated them so we could get easy baskets. We don’t have the big 6’2, 6’3 kid inside, so we did that to show our speed…get everybody around the perimeter and get some easy baskets.”
Jykiera Long led the Lady Panthers in scoring with 18 points and Shidajah Johnson scored 11. Deasia Ford also had a good night, as she scored eight points in the winning cause.
It didn’t start out well for ASH as the Lady Syrupmakers went on a 9-2 run to start the game. However, the Lady Panthers roared back with a 7-0 run of their own to tie the game, capped off by a basket from Jykiera Long. Then with under a minute remaining and the Lady Panthers trailing 11-9, Long scored again to tie the game at 11-11. Cairo turned the ball over with 35 seconds left in the first quarter, giving Americius-Sumter a chance to hold for the last shot. Jykiera Long missed a shot to take the lead, and both teams ended the first quarter tied 11-11.
During the first few minutes of the second quarter, it was a back-and-forth affair. However, Americus-Sumter went on an 8-2 run to take a 21-16 lead with 5:05 left in the half. Later in the half, the Lady Panthers increased their lead to 25-18 on two free throws by Jykiera Long. Americus-Sumter increased their defensive intensity, forcing Cairo into committing turnovers.  Cairo cut the lead to six when Ambria Vicks made one of two foul shots. As the half wound down, the Lady Panthers’ defense continued to cause Cairo to turn the ball over. Americus-Sumter was able to take advantage by scoring four straight points, giving them a ten-point lead. However, Ta’landra Jackson nailed a three-pointer for the Lady Syrupmakers with 1:22 to go. This sparked a 5-0 run by Cairo. However, the Lady Syrupmakers continued to turn the ball over, and as the halftime buzzer sounded, Deasia Ford drove baseline and scored to give Americus-Sumter a 33-24 halftime lead.
Jykiera Long led the way for the Lady Panthers with 14 first-half points, while Cairo was led by Ta’landra Jackson with 11 points in the first half.
To start the second half, the Lady Panthers used a lot of clock to move the basketball around and work for the good shot. Their patience paid off when Ford got the ball on the inside and scored, giving Americus-Sumter a 35-26 lead. For half of the third quarter, both teams struggled to score, but the Lady Syrupmakers cut the lead to six when Ambria Vicks scored to make it 35-29 Lady Panthers. Americus-Sumter continued to move the ball around for several minutes without taking a shot. This gave Cairo fewer opportunities to score. Then with three seconds left on the clock, Shidajah Johnson was fouled while shooting. Johnson made both free throws and the Lady Panthers enjoyed a 41-30 lead to start the fourth quarter.
Cairo answered right away to start the fourth quarter, as Ambria Vicks hit a three-pointer.

However, ASH answered right back when Yolanda Tyson scored. Then the Lady Panthers increased their lead to 12 at 45-33 when Johnson scored again. Cairo continued to struggle scoring from the field, so they applied full-court pressure, as they were down by 14. However, the Lady Panthers were able to break Cairo’s press. With a little over four minutes to go, the Lady Panthers enjoyed a 48-33 lead before Ta’landra Jackson was fouled and made both free throws, cutting the ASH lead to 48-35. With 3:30 to go in the game, Americus-Sumter started playing four corners to run clock. Cairo continued to struggle from the field, making it easier for the Lady Panthers to milk the clock and hang on to their double-digit lead.
Americus-Sumter continued to run their four-corners offense to run the clock down and salt away the victory. Cairo didn’t foul until the 1:38 mark when Jykiera Long was fouled and made both free throws, extending the lead to 52-38. At this point, the Lady Panthers knew their losing streak was over as they left Cairo with a 54-42 victory.