Panthers keep the train rolling with win at Cairo 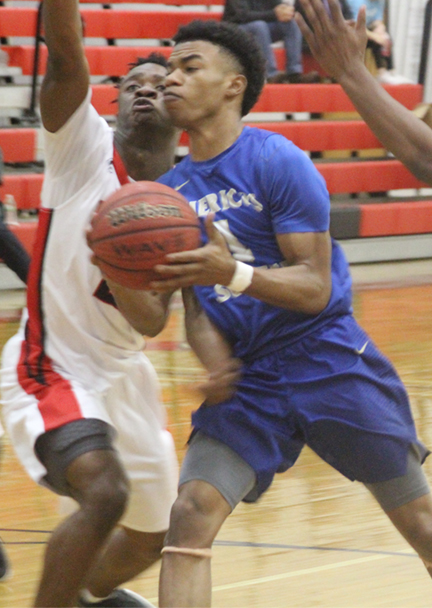 Americus-Sumter Sr. PG Eric Hall with the ball against a Cairo defender

CAIRO – Americus-Sumter continued their winning ways as they used their high-pressure defense to force Cairo into turnovers on their way to a 53-43 win over the Syrupmakers.
With the win, the Panthers improve to 18-2 overall and 7-2 in GHSA Region 1-AAAA play. They are currently in second place behind Westover (8-2).
“We just had to play a lock-down man-to-man defense and guard the paint”, ASH Head Coach Michael Hoffpauir said. “They (Cairo) turned the ball over pretty well for us. Now on the other hand, we turned the ball over way too much. That allowed us to not score as much as we should have and we wasted possessions, but a road-game win in region play this time of year, we’ll take it.”
The Panthers had balanced scoring from several players. Traveon Brown, Joshua Lusane and Eric Hall each scored eight points to lead the Panthers.
The Panthers jumped out to a 9-3 lead as Traveon Brown hit two three-pointers and Joshua Lusane hit one from beyond the arc. From then on, it was an evenly-played first quarter with the Panthers up 13-8 by the end of the quarter.
The Panthers went on an 11-5 run in the second quarter, capped off by another three-pointer by Brown. At the 2:36 mark of the first half, ASH enjoyed a 26-16 lead over the Syrupmakers. However, with under a minute left, Cairo shooting guard Philliek Byrden nailed a three-pointer, letting the Panthers know that the Syrupmakers weren’t going away. Both teams went into halftime with Americus-Sumter leading 32-24.
With 5:54 to go in the third quarter, the Panthers led 32-27 before Traveon Brown got a steal and was fouled while shooting. Brown made both free throws, putting the Panthers up 34-27. Both teams struggled to score in the third quarter, but Elliz Knighton was able to give the Panthers an eight-point lead with a little over three minutes to go. Then the Panthers turned up the defensive pressure, and Karmil Hamilton stole the ball and scored. Sh’Qual White followed up with another basket, giving the Panthers a 40-28 lead. This forced Cairo Head Coach Ike Chance to call timeout.  As the third quarter wound down, both teams played out of control at times, committing numerous turnovers. Then with 39 seconds to go, Hamilton was assessed a technical foul. Kentrel Sims hit one of the technical foul shots for the Syrupmakers, but the Panthers maintained a double-digit lead at 41-29 as the fourth quarter started.
Philliek Byrden hit a baseline jumper for Cairo to start the fourth quarter. Fouled on the shot, he had a chance for a three-point play, but missed the free throw. Cairo struggled to score from the field in the second half. By the 6:31 mark of the fourth quarter, the Syrupmakers had only scored seven points since halftime. Part of this was due to the Panthers’ tenacious defense, limiting Cairo’s opportunities. The Panthers took a 45-31 lead when Joshua Moore scored on the inside. The Syrupmakers went on a 5-2 run late in the fourth quarter. Americus-Sumter had chances to increase their lead, but the Panthers missed some shots, including a missed dunk by Moore. By the 2:09 mark, Cairo had cut the Panthers’ lead to 49-41. It would be the closest the Syrupmakers would get.
With under two minutes to go, Americus-Sumter began to stall and run the clock down until Joshua Lusane scored and was fouled. Lusane made the free throw, completing the three-point play. By this time, the Syrupmakers’ only hope to get back in the game was to foul the Panthers and hope for missed free throws. However, that did not happen, and Americus-Sumter won 53-43.
The Panthers will host Hardaway at 7:30 p.m. on Friday