Lady Raiders continue to roll with win over Brookwood 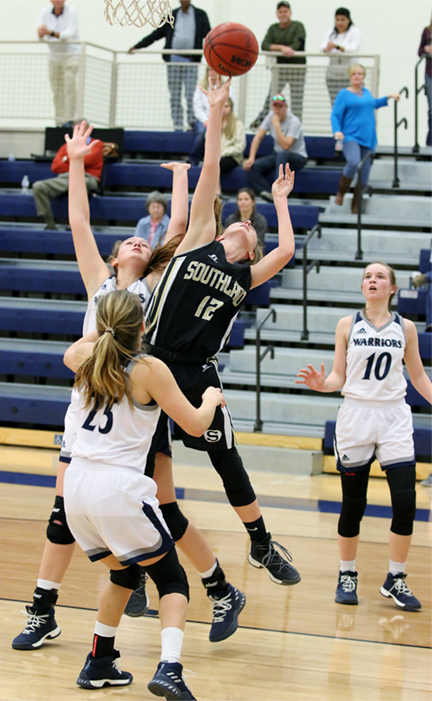 Southland's Sydney Payne goes up for a rebound against Brookwood. Payne made the deciding free throw that won it for the Lady Raiders.

THOMASVILLE – The Southland Lady Raiders were pushed to the limit by Brookwood and the game went down to the wire. However, Southland was able to scratch and claw their way to a hard-fought 35-34 victory over the Lady Warriors.

Currently, Southland is 16-3 overall and undefeated at 4-0 in region play.

“We got off to a good start and showed a lot of toughness in the second halft when things weren’t going our way”, Southland Head Coach Ty Kinslow said. “We kept playing great defense and found a way to win in a tough environment. ”  Coach Kinslow singled out Sydney Payne for praise for her courage to take the ball to the basket and get fouled with 2.6 seconds left, and making the deciding free throw. “After Brookwood called timeout to ice her, she calmly stepped to the free-throw line to make the basket to give us a hard-fought win”, Kinslow said.

Balanced team scoring carried the day for the Lady Raiders. They were able to get contributions from several players. Macy Williams led the Lady Raiders in scoring with seven points and she grabbed two rebounds. Calyn Fort, Holly McCain and Savanna Banks each scored six points, and both Cassie Bass and Sydney Payne each chipped in five points in the winning cause.

The Lady Raiders also had several players contributing on the boards and on the defensive end. Payne led the Lady Raiders in rebounding with seven boards. Fort and Banks each tallied four rebounds. And Holly McCain pulled down three rebounds for the Lady Raiders.

In addition to her five points, Cassi Bass got it done on the defensive end, getting two steals on the night. Sydney Payne was in a giving mood, as she dished out four assists.

The Lady Raiders will have a week to recover before they host Tiftarea Academy at 6:30 p.m. on Tuesday.