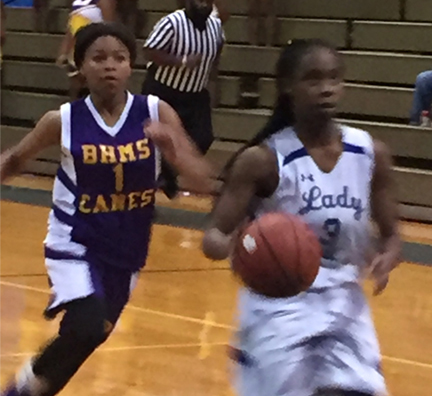 AMERICUS – It was everything one would expect in the girls’ championship game of the Deep South Middle School Conference. Both teams, Sumter County and Ben Hill, fought to the end. The game went down to the wire in front of a loud, intense and raucous crowd. It came down to a final shot. However, Avi’Yonna Clemons’ three-point attempt was blocked, and Ben Hill emerged as champions, beating Sumter County 34-31.
“I think we allowed them to come in and set the pace for us when normally we set the pace and tempo of the game”, SCMS Head Coach Shirley Williams said. “We just gave it up to them too early. We struggled with free throws. We struggled as far as our fouls…keeping our hands up and moving our feet. When we had the ball, we made a lot of turnovers. That’s usually not us. Even when we do commit turnovers, we’re able to bounce back. The ball just bounced a different way today.”
The first quarter was evenly-played between both teams, but Ben Hill had a 10-8 lead by the end of the quarter.
Both teams played at a frenetic, fast pace in the second quarter, but it wasn’t until the five-minute mark that Sumter County tied the game at 10-10 when Tiffany Goodman scored and was fouled. Unfortunately for the Lady Panthers, Goodman wasn’t able to convert the three-point play.
Around the three-minute mark of the second quarter, both teams battled fiercely. Both teams blocked shots and dove for loose balls. but both teams struggled to score. However, with about two minutes to go, the Lady Panthers got a steal and a basket to give Sumter County a 13-12 lead. Sumter County got another steal shortly thereafter and Avi’Yonna Clemons drove to the basket and was fouled. However, Clemons was unable to make the free throws.
Ben Hill used full-court pressure to disrupt Sumter County’s offense. The Lady Hurricanes were able to get baskets from Khameron Whitman and Brittany Love. Just before the half ended, the Hurricanes took an 18-16 halftime lead when Love scored again.
During the first few minutes of the third quarter, both teams traded baskets. Ben Hill had a 20-19 lead before the Lady Hurricanes called timeout with 4:25 left in the third.
For the next minute or so, the Lady Hurricanes went on a 5-0 run, capped off by a jumper by Khameron Whitman. This forced Sumter County to call time out with 2:15 left in the third. Late in the third quarter, Sumter County had trouble scoring, as they missed several easy shots. Then with 35.4 seconds to go, Ben Hill’s Treasure Freeman scored and was fouled, but couldn’t convert at the line. However, the Lady Hurricanes had a 28-22 lead at the end of the third quarter.
With 5:19 left in the fourth quarter, Freeman drove to the basket and scored to give Ben Hill a 30-23 lead. However, the Lady Panthers made a 4-0 run, capped off with a basket by Trinity Jackson to cut the deficit to 30-27 Ben Hill. Sumter County continued to struggle to make shots in the fourth quarter, and fell behind 32-27 on a basket by Khameron Whitman of Ben Hill.
Sumter County had one last chance to tie the game, but Clemons’ shot was blocked. It was celebration time for the Ben Hill Middle School Lady Hurricanes. Treasure Freeman led the Lady Hurricanes with 16 points.
Sumter County, having come into this game undefeated at 11-0, finish the season at 11-1.

However, the Lady Panthers weren’t done yet as Avi’Yonna Clemons drove to the basket and scored to cut the deficit to 32-29. Then Sumter County got the ball back and Clemons was fouled. She made both free throws, making the score 32-31 Ben Hill.
With 40 seconds to go, the Lady Hurricanes had the basketball, but Sumter County got a steal. However, the Lady Panthers turned it over and Mariah Johnson found Brittany Love for a layup. The score was 34-31 Ben Hill.

Sumter County had one last chance to tie the game, but Clemons’ shot was blocked. It was celebration time for the Ben Hill Middle School Lady Hurricanes. Treasure Freeman led the Lady Hurricanes with 16 points.
Sumter County, having come into this game undefeated at 11-0, finish the season at 11-1.