AMERICUS — John Edgemon of Americus is an American hero. Modestly, he says he was just doing his job, but there’s a lot more to it than that. There is a story behind the story.
“The Final Mission of Extortion 17 — Special ops, helicopter support, SEAL Team Six, and the deadliest day of the U.S. War in Afghanistan”, by Ed Darack, was published in fall 2017, by Smithsonian Books. 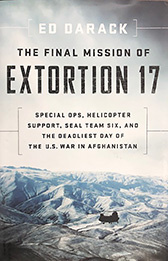