For the love of Ozzy 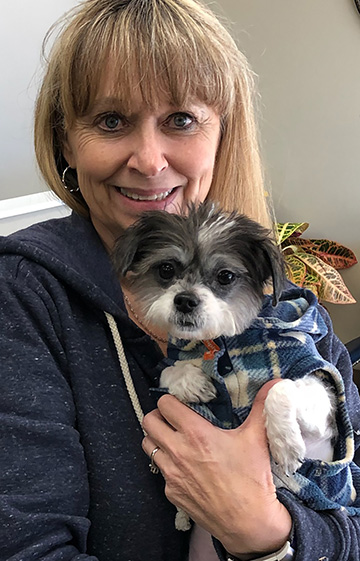 Ozzy is shown with his foster mom, Ruth Olson, who is also shelter director for the Sumter Humane Society.

AMERICUS — Can you imagine being heartless enough to put out a small, injured animal at a closed animal shelter on a night when freezing rain is falling? Someone did, or maybe the person who did this was ignorant or mentally ill or had some other reason for not knowing that such behavior is considered by most people as unacceptable and unimaginably cruel. Animals are God’s creatures, too. 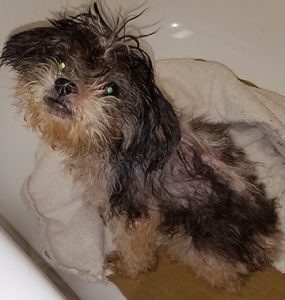 This is what Ozzy looked like after he had been brought inside from the elements the day he was found abandoned at the animal shelter. His matted, filthy fur and his sore-ridden little body are heart-breaking sights for animal lovers.

Whoever dropped the year-old little dog, found on Dec. 30, 2017, outside the Sumter Humane Society’s animal shelter, could not have known what the outcome would be. The five-pound dog could have perished from exposure. He could have wandered away and been struck by a car. Fortunately, a cleaning crew had finished their chores that morning and when they came out, the found the shivering dog.
Ruth Olson, shelter manager of the Sumter County Humane Society, said the little dog, whom they have since named Ozzy, was found cowering near the door of the facility, in a futile attempt to get warm. She said the dog was immediately taken to a local veterinarian, Dr. Linda Sawyer of Whispering Pines Animal Hospital, for assessment. He was severely underweight and starving. Ozzy’s fur was so matted and filthy, that his little body had to be completely shaved. That’s when his old injury was discovered: one of his hind legs had sustained a serious injury at some point during his short life. His Achilles tendon was hanging on by a thread, Olson said. Ozzy’s allergic reaction to fleas had wreaked havoc on his skin. This little dog had suffered immensely, no doubt.
Olson describes Ozzy as a Shih tzu mix, weighing about eight pounds. Since he was rescued, Ozzy’s personality has emerged, she said, noting that he wags his tail and loves to be petted. Ozzy cannot walk correctly because of his injury. Last week, Olson took Ozzy to the Auburn University Teaching Hospital in Auburn, Ala., for examination by a canine orthopedic specialist. The surgeon recommends repairing the tendon or using screws and plates to recover Ozzy’s mobility. The cost will be $4,000.
Olson has been fostering Ozzy in her home since he was found. “I love this little dog,” she said, adding that Ozzy sleeps in the bed with his foster mom. “Ozzy deserves to have a good life,” she said.
It is only conjecture to know what happened to Ozzy, but Olson said, “Probably someone got him and put him outside. He needed care and grooming. When his owner couldn’t or wouldn’t do it, they decided on the coldest day of the year to dump him at the shelter.” She said the shelter gets dogs like this every two months or so, pets relinquished because they require too much care and attention. 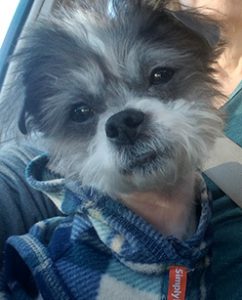 This is Ozzy a couple of weeks ago when his foster mom took him to Auburn University’s teaching hospital to get a prognosis for the little dog’s hind leg injury. There is hope for Ozzy if the $4,000 can be raised for his orthopedic surgery. Ozzy needs our help.

The decision on Ozzy’s surgery will have to be made in the next few weeks. He will be available for adoption after his surgery. “If they can pry him from my arms,” Olson said in jest. There will be an adoption fee for Ozzy because he will have to be neutered and has undergone all his vaccinations and various testing. But whoever gets Ozzy will be repaid a thousand times every time he looks adoringly into his human’s face with his sweet, soulful eyes. Ozzy is still a young dog and can look forward to a healthy, happy and long life if he has this surgery.
This is where animal lovers come into Ozzy’s story. The $4,000 fee for his surgery is not something that can be underwritten by the Sumter Humane Society (SHS), which operates mostly on private donations anyway. But people can open up their hearts to Ozzy, and their pocketbooks and donate for his surgery. They can mail their donations to Sumter Humane Society, 108 Industrial Blvd., Americus GA 31719 or visit the SHS’ Facebook page and use PayPal, or visit www.sumterhumanesociety.org. For more information, call 229-924-0268.
Americus is a community that has always been willing to get behind a good cause. Ozzy is one of those causes.