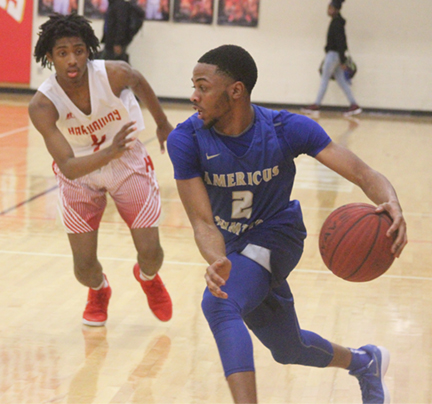 COLUMBUS – Americus-Sumter came to Hardaway Friday night, February 2, ready to play. It showed as they jumped on the Hawks early on their way to a 72-46 victory.

This sets up a winner-take-all scenario Saturday night, February 3, as the Panthers (22-2, 11-2) are tied with Westover (19-5, 11-2). The Patriots defeated Carver 79-71 Friday night. The winner of Saturday’s game will finish at the top of the Region 1-AAAA standings and will host the Region 1-AAAA Tournament next week.

The Panthers had two players in double-figures. Eric Hall led ASH in scoring with 11 points and Joshua Lusane scored 10. “We knew that we needed to come down here and finish business so we can hopefully get a win tomorrow (Saturday) for the region tournament”, Lusane said. Harold Moore led Hardaway (7-17, 4-10) with 13 points.

The Panthers jumped out of the gate right away to start the game, taking a 16-3 lead. As the first half continued, the Panthers increased their lead to 28-8. “I was really impressed with the guys. I liked their energy coming out early. I knew that was going to be a big part of our success tonight…coming out very energetic, playing hard defense. It set the tone for us”, ASH Head Coach Michael Hoffpauir said.

However, the Hawks went on 14-4 run to get back in the game. By halftime, the Panthers’ lead had been cut to 32-22. “I told them to keep our defensive pressure up”, Hoffpauir said. “We got away from what we were doing to force turnovers and get the scoring. In the second half, I said we were going to keep up the pressure until they find a way to fix it or break our pressure. We’re going to keep our pressure on them. We pretty much stayed in that pressure mode all the way until the last few minutes of the fourth quarter.”

Sh’Qual White led the Panthers’ first-half attack with six points and Elliz Knighton scored five first-half points. Ahmad Maddox and Harold Moore led the Hawks in the first half with five points each. 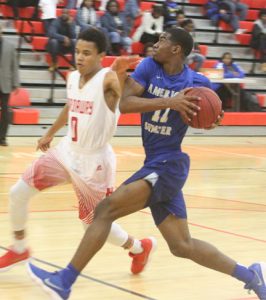 The Panthers’ Elliz Knighton drives to the basket against Hardaway.

Hardaway’s Tahiem Maberry scored the first basket of the second half, and was fouled while shooting. However, Maberry couldn’t make the free throw. At that point, it was 32-24 Panthers and that would be as close as the Hawks would get. Both teams traded baskets for the next few minutes, but Americus-Sumter maintained a 38-26 lead with a little over four minutes to go.

With a little over six minutes left in the fourth quarter, Sh’Qual White scored on the inside to give the Panthers a 53-34 lead. The Hawks were not able to cut into the Panthers’ lead, and with 4:41 to go, Joshua Lusane scored on the inside, was fouled and converted the three-point play. The Panthers continued their onslaught as Kobe Lewis scored to make it 60-38 Americus-Sumter. At this point, the Panthers were in total control of the game.

The Panthers continued executing offensively for the remainder of the game. With just under three minutes left in the game, David Sumlin dished a nice pass to Marcus Lusane, who scored, making it 62-41 Panthers. Marcus Lusane scored again on the inside with 2:15 to go. He was fouled while shooting and converted the three-point play.

At this point, Hoffpauir was able to put in his reserves. Sam Crumbly drove to the basket and was fouled. Crumbly made both free throws, giving ASH a 69-41 lead. ASH continued to play hard for the rest of the game, and finished with a 72-46 win.