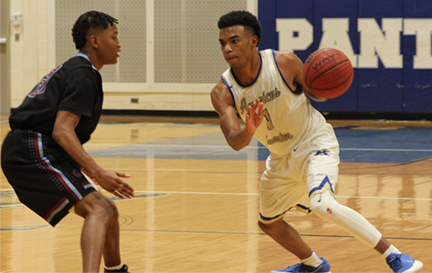 AMERICUS – Trailing 47-42 to Westover in the fourth quarter, the Panthers went on a 14-0 run to secure a 63-56 victory over the Patriots Saturday on Senior Night, February 3.

With the win, Americus-Sumter (23-2, 12-2) has secured the number one seed in Region 1-AAAA and will host the region tournament Thursday and Friday, February 8-9.

“We met one of our goals for the season: win the regular season to be able to host the region tournament”, ASH Head Coach Michael Hoffpauir said. “I’m proud of the team’s performance.”

The Panthers scored the first three baskets of the second half, and enjoyed a 40-32 lead. However, the Patriots went on a 10-2 run to close out the third quarter. The teams were tied at 42 at the start of the fourth quarter.

ASH senior guard Eric Hall exploded on Senior Night with 25 points to lead the Panthers in scoring. Hall scored seven of those points from the foul line, going 7-of-12 from the line. Joshua Lusane had a double-double. He scored 13 points and grabbed 11 rebounds. Senior Sh’Qual White nearly had a double-double. White scored nine points and grabbed 10 rebounds in his final regular-season game.