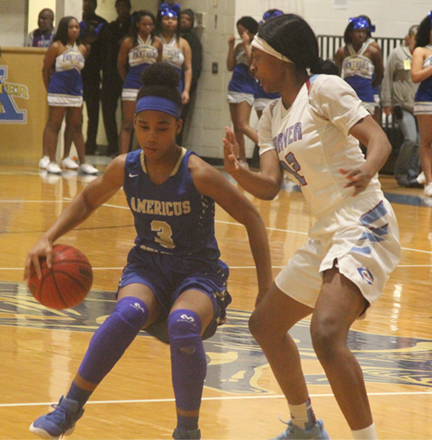 Jykiera Long with the ball against a Carver defender. Long scored 20 points in the Panthers’ loss. Photo by Ken Gustafson

AMERICUS – It was the championship game of the Region 1-AAAA Tournament at Americus-Sumter High School Friday night, February 9. Both teams, Americus-Sumter and Carver had already qualified for the GHSA Class 4A State Tournament. However, it would be the Lady Tigers’ night as Americus-Sumter committed too many turnovers and gave up too many second-chance rebounds to Carver. The Lady Tigers (25-1) were winners 61-50 over the Lady Panthers.

“We’ve got to keep working. Getting offensive rebounds was one of the things that we were working on and had been preaching all week”, Americus-Sumter Head Coach Sherri Harris said. Harris was extremely pleased with the effort of Brianna Pope. “Brianna Pope played pretty solid. Number 44 (Olivia Cochran) is a tremendous athlete, a tremendous basketball player. I’m quite sure we’ll be seeing her for the next couple of years at the next level. All-in-all, we didn’t complete our mission. Our mission was to not give up so many offensive rebounds. Some of our key players were missing entirely too many free throws in key moments. However, like I told the girls, we could have laid down easily, but we competed.”

The Panthers had two players in double-figures. Jykiera Long led Americus-Sumter in scoring with 20 points and Brianna Pope scored 12. “We could have easily backed down, but we didn’t”, Jykiera Long said. “We came out stronger. We didn’t give up. We played hard and we kept fighting.” Carver was led in scoring by Olivia Cochran with 17 points. Mariah Igus scored 13 and Janya Love-Hill chipped in 11.

Carver went on a 7-0 run to start the game. They used full-court pressure to disrupt the Lady Panthers’ offense. However, a few minutes later, ASH settled down and got back in the game as Jykiera Long hit a three-pointer to cut Carver’s lead to 9-5. ASH scored two more baskets to tie the game, but Carver scored the next three points to close out the quarter, leading 12-9.

The Lady Tigers quickly scored the next two baskets to start the second quarter. Mariah Igus scored on an offense rebound, and Janya Love-Hill scored on a dribble-drive to the basket. This forced ASH Head Coach Sherri Harris to call timeout. Out of the timeout, Long scored to cut the deficit to 16-11, but Carver responded as Alicia Reese scored on the inside.

ASH struggled to score in the second quarter and turned the ball over. This allowed Carver to build a 23-12 lead thanks to baskets by Sadrea Mabry and Olivia Cochran. This forced Harris to call another timeout to settle her club down, but Carver continued to force the Lady Panthers into turnovers. With 2:02 to go in the half, Carver had a 25-12 lead. At that point, Tykiera Long was fouled and made both free throws. However, Janya Love-Hill nailed a three-pointer for Carver, and the Lady Panthers found themselves down 28-14 with 1:35 left in the half. With 1:20 left and Carver leading 29-14, Brianna Pope was fouled and made both free throws. On their next possession, Americus-Sumter’s Shidajah Johnson scored on an offensive rebound and was fouled. However, she was unable to convert the three-point play. The Lady Panthers struggled at the line in the first half, as they had done all season. By halftime, however, they were only down 30-20.

The two teams traded baskets for the first minute and a half. Tykiera Long made one of two free throws to cut Carver’s lead to 32-23. However, with 5:34 to go, Olivia Cochran was fouled and hit two free throws, putting the Lady Tigers back up by 11. However, Shidajah Johnson was fouled while shooting, and was able to sink both free throws to make it 34-25 Carver. The Lady Tigers forced a turnover from ASH, and Cochran scored and was fouled. Cochran made the free throw, and Americus-Sumter found themselves down 36-25. A few minutes later, Jykiera Long scored to cut Carver’s lead to 37-29. Then with 3:04 to go in the third, Long was fouled and made both free throws. ASH was only down by six at 37-31. Long was trying to bring her team back once again, as she was fouled while driving to the basket. Long made both free throws, and the Lady Panthers were only down by three at 37-34 with a little over two minutes left.

Carver responded when Mariah Igus knocked down a three-pointer. Then Carver forced a turnover. Love-Hill was fouled and hit one of two free throws. However, off the second miss, Carver got the rebound and got another basket, putting the Lady Tigers up 43-33 with under a minute left in the third quarter.

However, Jykiera Long knocked down a three-pointer, electrifying the crowd and putting the Panthers to within seven at 43-36. Carver outscored ASH 4-1 to close out the third quarter and led 47-37.

Brianna Pope scored for ASH early in the fourth quarter. However, the Lady Panthers struggled to get offensive rebounds, and gave up another basket. This was something they struggled with throughout the game.

However, Nyja Carson gave the home crowd some hope when she stole the ball and scored with close to three minutes left. At this point, it was 51-43 Carver. Then Jykiera Long was fouled while shooting and made both free throws, the deficit was cut to six. However, the Lady Tigers pushed the lead back up to eight on two free throws by Mariah Igus. The Lady Panthers came up empty on their next trip down the court, and Olivia Cochran scored on the inside for Carver. The Lady Panthers found themselves down 57-45 with 47.9 seconds to go. They were not able to make a last-minute comeback in this game, and Carver went on to become region champions, beating Americus-Sumter 61-50.