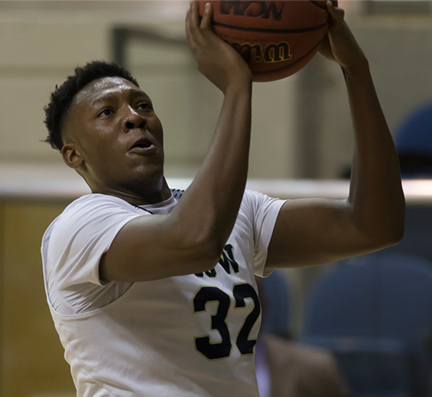 GSW junior forward Andre Statam goes up for a score against Flagler. Statam led the Hurricanes with 20 points

AMERICUS – After a good, competitive first half, the Georgia Southwestern State University Men’s Basketball team was outscored 12-4 in the first eight minutes of the second half by Flagler. This led to the Saints handing the Hurricanes at 64-53 loss at the Storm Dome Wednesday night, February 14.

With the loss, Georgia Southwestern State falls to 12-11 overall and 8-11 in the Peach Belt Conference. At the moment, the Hurricanes own the seventh spot in the PBC standings. The top eight teams qualify for the PBC Tournament. With the win, Flagler improves to 9-14 overall and 6-13 in the PBC.

In fairness to the Hurricanes, their depth has been depleted due to injuries, and GSW Head Coach Ben Hicks was working with seven eligible players. “I thought fatigue set in. We were limited with our depth tonight”, Hicks said. “We only had seven guys to dress out and Jason Weaver got into foul trouble. I was obligated to play six guys. Our legs were tired and our shots came up short. We really gave a great effort on the defensive end and our guys played hard, but our offense suffered tonight.” Weaver was limited to 12 minutes of game time due to foul trouble. He scored two points and grabbed one rebound.

The Hurricanes had two players in double-figures. Andre Statam led GSW in scoring with 20 points. He nearly had a double-double as he had eight rebounds. Statam also had three assists and two steals on the night. Dajion Macklien scored 11 points. He also had two rebounds, one assist and one steal. “I think it was the fatigue”, Statam said. “Right now, we’re only playing six to seven guys. We’re missing four players, two of them starters.”

The Hurricanes jumped out to an 18-9 lead in the first half. Then Flagler outscored GSW 10-6 in the latter minutes of the half until Dajion Macklien scored to give the Canes a 26-19 lead. Then Vaughn McCall hit a three-pointer for the Saints, cutting the lead to 26-22. A few minutes later, GSW led 30-28 when Devin Watson was fouled. He hit both free throws to give the Canes a 32-28 lead. However, McCall hit another three-pointer as the horn sounded. Both teams went to the locker room with GSW up 32-31.

Damerit Brown opened the scoring in the second half to give Flagler a 33-32 lead. Trace Williams scored with a little under 18 minutes in the second half to extend the Saints’ lead to 35-32. Then McCall scored again and GSW found themselves down 37-32. Flagler had gone on a 6-0 run to start the second half. R.J. Sessions ended the Canes’ scoring drought with a jumper, cutting the deficit to three. The Canes continued to struggle scoring. Timeout was called with 14:39 to go and GSW trailing 39-34.

GSW turned the ball over with under 14 minutes to play, resulting in another basket for Flagler. However, John Mason was able to score, cutting the deficit back to five at 41-36. GSW committed another turnover, and Cortlin Davis scored on a fast-break basket. During this point of the game, the Hurricanes were struggling to score and turning the ball over. The saints were taking advantage of those turnovers, and led 43-36 with 12:12 to go. In the first eight minutes of the second half, GSW only scored four points while Flagler scored 12.

With 10:21 to go, Andre Statam scored to keep the deficit at 48-38 Flagler. However, the Saints scored on a three-point play to take a 51-38 lead. Both teams traded baskets on their next possessions. With 7:39 to go, GSW trailed 53-40. Devin Watson tried to make something happen by driving to the basket to score or get fouled. However, his shot was swatted away. The Hurricanes were unable to score on that possession, but they were able to force Flagler into committing a turnover on the defensive end. The Hurricanes tried to get back in the game by shooting from the outside, but were unable to score. The Hurricanes continued to struggle scoring, and with 5:54 to play, they found themselves down 55-40 to the Saints.

However, Dajion Macklien gave the Canes some life as he hit a three-pointer. Then R.J. Sessions hit a jumper to cut the Saints’ lead to 55-45, forcing Flagler to call timeout with 4:50 to go. On Flagler’s next possession, they were called for an offensive foul, giving the Canes more life. With 3:55 to go, Dajion Macklien was fouled while attempting a three-pointer. Macklien made two of three foul shots, cutting the lead to 55-47. Flagler responded with a basket, but R.J. Sessions scored to make it 57-49 Flagler with 2:53 to go.

However, the Canes were unable to score during the next minute, and Flagler’s Chris Williams drove inside, scored and was fouled. Williams failed to make the free throw, but Flagler maintained a 59-49 lead. The Hurricanes weren’t able to make a last-minute run, and the Saints left Americus with a 64-53 win.

The Hurricanes will try to get back into the win column when they host Augusta University Saturday, February 17, on Homecoming / Senior Day. Tip-off is scheduled for 4:30 p.m.