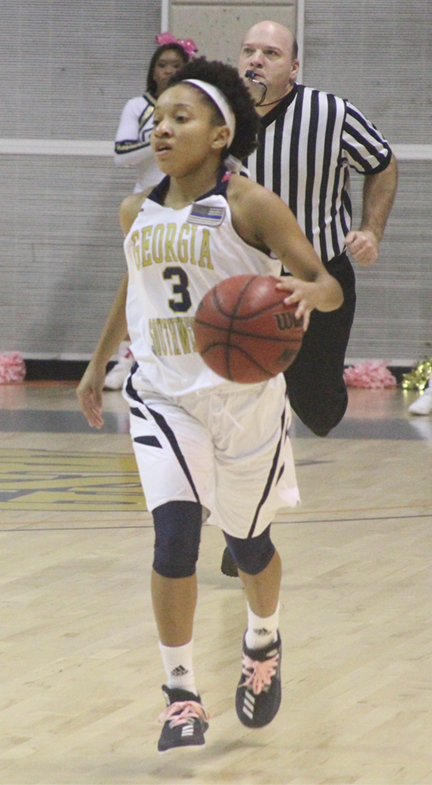 GSW sophomore guard Kya Cochran dribbles the ball up the court against Flagler.

AMERICUS -With time running out to get into the eighth and final berth for the Peach Belt Conference Tournament, the Georgia Southwestern State University Lady Hurricanes desperately needed a win Wednesday night against a tough Flagler team sitting at second in the PBC standings. Coming into Wednesday’s game against the Lady Saints, the Lady Canes were in 10th place, trailing Young Harris and UNC Pembroke for the eighth spot.

However, a 12-4 run by the Lady Saints in the third quarter was something the Lady Canes couldn’t overcome, and the Lady Saints handed GSW a 75-66 loss at the Storm Dome Wednesday night, February 14.

This was a damaging loss for the Lady Canes as far as their hopes for getting into the PBC Tournament. The loss puts their overall record at 7-16 and 4-15 in the PBC. However, they are still mathematically alive with three conference games to go. As for Flagler, they improve their overall record to 16-7 overall and 14-5 in the PBC. They are currently in third place in the PBC standings.

GSW had two players in double-figures. Mariya Trimble and Amanda Melosky each turned in solid performances, leading the Lady Canes in scoring with 16 points each. Gabby Figgers shot the ball well from beyond the arc, hitting 3 of 6 three-pointers and scoring nine points. The Lady Saints also had three players in double-figures. Bri Roberts led the way for Flagler with 19 points and Tabitha Odabe had a double-double, scoring 18 points and grabbing 15 rebounds. Odabe was extremely tough for the Lady Canes to contain.

“She’s 6’5 with long, long arms. She hurt us on the boards”, GSW Head Coach Kelly Britsky said. “Pretty much everything she caught went in.” In spite of the loss, Coach Britsky had tremendous praise for Gabby Figgers and Amanda Melosky, as well as for the rest of her squad for their effort. “Gabby’s been a little quiet lately, so for her to hit those is a good sign”, Britsky said. “She gave us a chance to have a good run in the end, and that’s exciting. Amanda melosky and Mariya Trimble both had 16 tonight. They shot the ball well. The girls really battled and they wanted this one. I feel bad for them that they weren’t able to get it.”

Things started off well for the Lady Canes, as Flagler was assessed a technical foul before the game began due to a scorebook infraction. Amanda Melosky made one of the technical. Then Shanya Jones scored to give GSW a 3-0 lead. From then on, the game was a back-and-forth affair between both teams. However, the Lady Saints outscored GSW 9-2 late in the first quarter. They gained a 25-18 lead near the end of the quarter on a basket by Malaysia Robinson. A few seconds before the buzzer sounded, Robinson scored again to give Flagler a 27-18 lead at the end of the quarter.

Early in the second quarter, the Lady Saints fed the ball inside to Tabitha Odabe, who scored to make it 31-20 Flagler. Odabe’s size and length was something GSW had to struggle with all night. The Lady Canes tried to shoot from the outside to get back in it, but they weren’t able to knock the shots down. With 6:51 to go in the half, Flagler led 33-23.

With 6:13 to go, Shanya Jones was fouled and had an opportunity to cut into Flagler’s lead, but she missed both free throws. With 5:48 to go and the score still 33-23 Flagler, Mariya Trimble was fouled and made both free throws, cutting the deficit to eight. Then with 5:13 to go, the Lady Canes showed their never-say-die spirit as they garnered several second-chance rebounds before Tyra Smith scored, cutting Flagler’s lead to 33-27. This forced Erika Lang-Montgomery, Flagler’s head coach, to call a timeout. Then with 4:39 to go, Tamecia Blue was fouled and hit one of two free throws. The Lady Canes were only down 33-28. They had gone on a 5-0 run.

However, Maggie Flynn nailed a three-pointer for Flagler to put the Lady Saints up by eight, but Tyra Smith answered for GSW, cutting the deficit to 36-30. Then with 3:11 to go, Trimble scored and was fouled. She was able to make the free throw, and the Lady Canes were only down 36-33 with less than three minutes left. Amanda Melosky cut the lead to one on a jumper. However, the Lady Saints scored two straight baskets to push their lead back up to five at 40-35. Tamecia Blue answered for GSW with a basket, making it 40-37 Flagler. Both teams traded baskets the rest of the way, and the Lady Canes were only down 46-41 at the half.

Mariya Trimble was already in double-figures by halftime, scoring 14 of her 16 game-high points in the first half.

Flagler scored the first four points of the second half and built a 50-41 lead. The Lady Canes seemed out of sync on offense, and head coach Kelly Britsky called timeout with 8:06 to go in the third quarter. Out of the timeout, Amanda Melosky scored to cut the deficit back to 50-43. Melosky scored again on the Lady Canes’ next possession to cut the lead to five, but Tabitha Odabe scored for Flagler to put their lead back up to seven.

On their next possession, the Lady Saints moved the ball around the perimeter patiently, and found Odabe on the inside for a layup. At this point, GSW trailed 54-45 with a little over four minutes left in the third. The deficit got bigger wen Bri Roberts drove to the basket and scored to give Flagler a 56-45 lead. Then Odabe scored again for the Lady Saints, and Coach Britsky called another timeout. The Lady Saints had gone on a 12-4 run in the third quarter, and led 58-45.

However, Roberts struck again for Flagler, nailing another three-pointer, making it 67-52 Flagler. Amanda Melosky responded with a basket for GSW, trying to keep the Lady Canes in it. However, Flagler struck with another three-pointer as Tiffany Hodge nailed one from beyond the arc. With seven minutes left in the game, GSW trailed 69-54. However, GSW would not go away. Gabby Figgers nailed a three-pointer with 6:32 left to cut the lead to 69-57. After another Flagler basket by Odabe, Figgers struck again with another three-pointer, cutting the deficit to 71-60. The Lady Canes were desperately trying to stop Flagler’s offense and cut into their lead. Timeout was called with 4:48 left, and GSW trailed 71-60.

Figgers hit her third three-pointer of the game out of the timeout, and GSW cut the deficit to single digits at 71-63 With 3:45 to go. Flagler turned the ball over, giving GSW some life.

GSW cut the deficit to 71-65 with another basket by Figgers. The Lady Canes still had a chance with time winding down. However, that would be as close as the Lady Canes would get, and the Lady Saints left Americus with a 71-65 victory.

“We just couldn’t finish in the second half”, Mariya Trimble said. “We started off strong shooting the ball and rebounding, and number 5 (Odabe) got hot and we just couldn’t put the ball in the hole.”

The Lady Canes will try to rebound from the loss and keep their post-season tournament hopes alive when they host Augusta University on Homecoming / Senior Day Saturday, February 17. Tip-off is scheduled for 2:30 p.m.