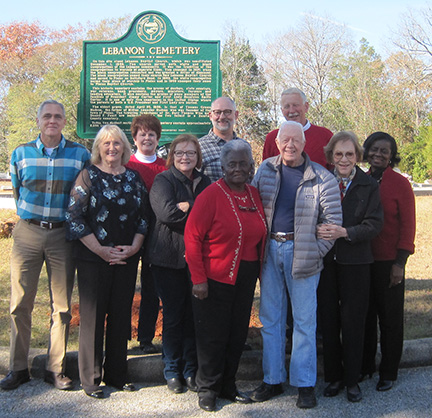 PLAINS — The Plains Historical Preservation Trust recently installed a new historical marker at Lebanon Cemetery. This marker identifies the important heritage from the 1800s of the community of Lebanon. Eventually, the church would move to the newly formed town of Plains. As Plains grew, three churches would eventually emerge from the Lebanon Community location – Plains Baptist Church, Lebanon Baptist Church and Maranatha Baptist Church.
The marker recognizes the importance of the old Lebanon Baptist Church which are established in the 1800s. This church served both white and black congregations of the Plains community.
It was the tradition of the congregations to worship at separate times and on different Sundays of the month.
This changed in 1871, when the black congregation requested and was granted a letter of dismissal. The black congregation retained the name Lebanon Baptist Church.
In the 1880s, many white residents moved into the newly formed town of Plains as the railroad was built there. The house of worship for the white residents, the forerunner of Plains Baptist Church, was moved into town.
This historic cemetery contains the graves of many members of the families of former President Jimmy Carter and former first lady Rosalynn Smith Carter, in addition to numerous other
prominent Sumter Countians. It is one of only five cemeteries in the United States where the parents of both a U.S. president and first lady are buried.
Doctors, state senators, war veterans, bank presidents, mayors, ministers, farmers and leading educators are among the many others interred here.
The oldest grave, dated April 30, 1856, is that of Thomas Green Hudson, the father of Milton Leander Hudson, founder of the town of Plains. The towering tombstones of Dr. Burr Thomas Wise and
Daniel F. Faust, a Confederate veteran, are believed to be the two tallest in a Sumter County cemetery.
Today, two distinct sections of Lebanon Cemetery contain approximately 2,000 graves.
For more information about historical markers in Plains or to join the Plains Historical Preservation Trust call 229-824-4567. Plains Historical Preservation Trust dues are $25 per year for a family and a single membership is $15.