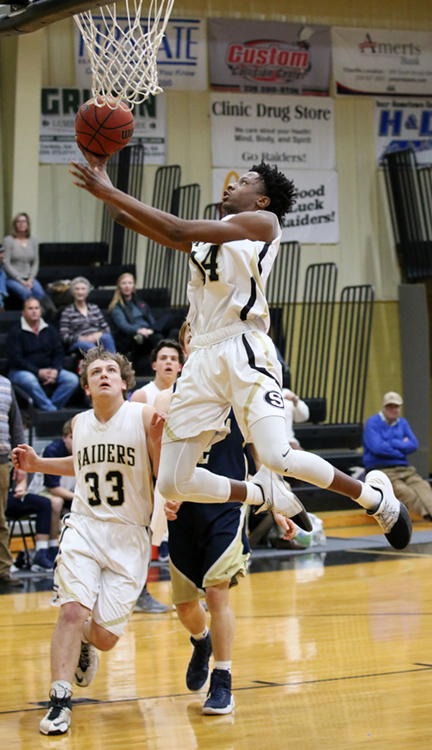 Southland Senior guard Saige Batten shown here against Tiftarea Academy earlier this season. Batten scored 23 points in his final game as a Raider against Holy Spirit Prep in the second round of the GISA Class AAA State Basketball Tournament.

Milledgeville – The Southland Academy Boys Basketball Team’s season came to an end Saturday, February 24, as they fell to Holy Spirit Prep 73-38 in the second round of the GISA Class AAA State Basketball Tournament at John Milledge Academy.

The margin of the score does not do justice to the Raiders, as they fought extremely hard against a team with overwhelming height and length. “We put up a great fight,” Southland Head Coach Rundy Foster said. “I am very proud of our team. They played extremely hard.”

The Cougars jumped out to a 12-2 lead, but the Raiders were able to keep HSP at bay, trailing 15-6 by the end of the first quarter.

In the second quarter, the Raiders went on a 13-6 run and cut the Cougars’ lead to 21-19 with three minutes left in the first half. However, the Cougars responded with a 10-1 run of their own, and led 31-20 at halftime.

In the second half, the Cougars took total control, going on a 30-2 run and effectively ending any hopes of a Southland comeback. Holy Spirit Prep went on to win 73-38, ending Southland’s season.

For three seniors: Saige Batten, Harrison Bell and Alex Roach, it was their final game in a Raider uniform. However, there is reason for optimism for next year as most of the current players will be returning. There is also a strong JV program being developed at Southland, which should produce success for the Raiders in the future.