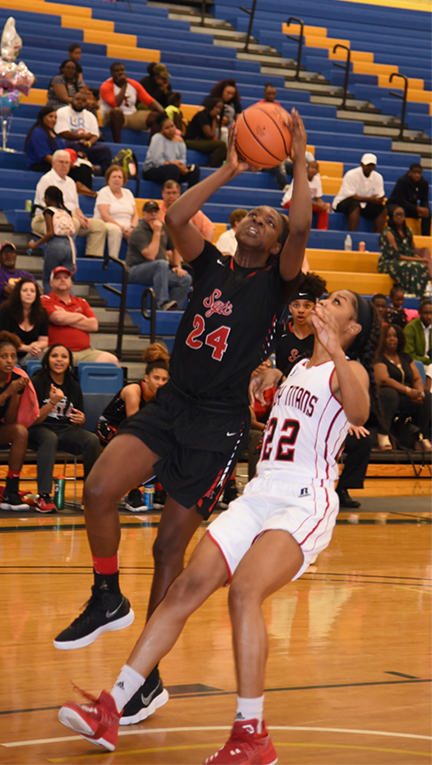 Esther Adenike had a double-double against Albany Tech, scoring 19 points and grabbing 13 rebounds. Photo by SGT.

ALBANY – Both the South Georgia Tech Jets and Lady Jets traveled to Albany on Saturday, February 24, and defeated the Titans and Lady Titans respectively at Albany Tech’s Sophomore Recognition Day.

The Lady Jets, ranked at the top of the Georgia Collegiate Athletic Conference (GCAA) standings, beat the Lady Titans 63-48, while the Jets took care of business, winning in a much tougher battle by the score of 68-64.

The win by the Jets secures them the right to host an end of the season quarterfinal playoff game on Tuesday, March 6. The winner of that game will advance to the NJCAA Region XVII Tournament at Georgia Highlands College in Rome, GA on Friday, March 9 and Saturday, March 10. 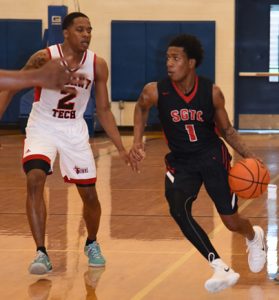 Sophomore guard Rico Simmons led the Jets in scoring with 18 points and he pulled down eight rebounds. Simmons hit 3 of 4 free throws in the final seconds to help the Jets seal the victory. Sophomores Mike Boone and Devante Foster each scored nine points in the Jets’ victory. Adonis Green nearly had a double-double. Green scored eight points and grabbed 10 rebounds on the day.

As far as the Lady Jets were concerned, they started out slowly and were down 14-13 at the end of the first quarter. They pulled ahead 28-24 by halftime. However, the second half was a different story. The Lady Jets took control in the second half, outscoring the Lady Titans 35-24.

Sophomore forward Esther Adenike had a double-double, scoring 19 points and grabbing 13 rebounds to lead the Lady Jets’ attack. Ricka Jackson was also in double-figures, scoring 14 points, and Dakata Toney rounded out the double-digit scoring with 10 points.

The game against Albany Tech was the last regular-season game for the Lady Jets. As for the Jets, they have one more regular-season game on Wednesday, February 28, at 7 p.m. as they host Gordon State College. The Lady Jets will host the NJCAA Region XVII Tournament on Friday, March 2, with games at 5:30 p.m. and 7:30 p.m.

The two winners will meet in the finals on Saturday, March 3, at 2 p.m.  The winner of the tournament will earn the right to advance to the District J play-in championship game and possibly the NJCAA National Tournament in Lubbock, Texas.

The Jets will host a quarterfinal playoff game on Tuesday, March 6, at 7 p.m.