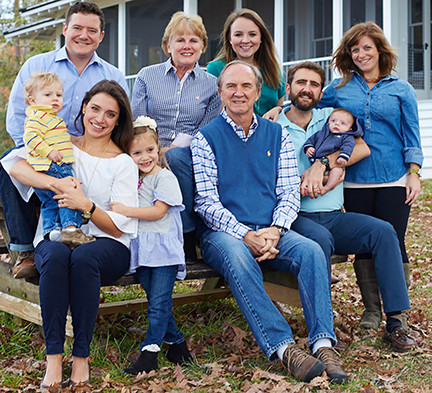 Herschel Smith and his family.

AMERICUS — Retired Naval Officer and Airline Captain Herschel Smith of Americus has announced his candidacy for the District 138 seat in the Georgia House of Representatives as a Republican Party candidate. Rep Bill McGowan, D, Americus, has announced that he is not running for re-election. District 138 includes Chattahoochee, Marion, Schley, and Sumter counties.
Smith was born and raised in Americus, graduated from Americus High School and is an Eagle Scout with Troop 21. He has a bachelor of science from the U.S. Naval Academy in Annapolis and has master’s degrees in telecommunication systems, international relations, and national security and strategic studies. He has over 600 landings on five different aircraft carriers flying F-4 and F-18 fighters. Commander Smith retired from the U.S. Navy after 25 years of service and then spent 21 years as a pilot for Southwest Airlines. His family has an unbroken string of six generations of military veterans.
Smith is married to the former Pam Ingram of Dallas,Texas. He is the son of Mary Ann Smith of Macon and the late Herschel Smith Jr. and grandson of Cora and Dr. Herschel Smith, GSW’s first physician. He is the brother of Kay Dee Green of Macon, Chief Judge of the Superior Court Rucker Smith of Americus, and Lee Smith of Forsyth. Pam and Herschel are the proud parents of two sons, Kip and Cole, and one daughter, Charlotte, who is an elementary school teacher in Alpharetta. Kip is an Air Force captain and his wife Missy is a high school calculus teacher. Cole is a former Navy lieutenant who now works as an urban planner in Atlanta. His wife Johanna is an environmental engineer for the State of Georgia. Herschel and Pam have three grandchildren.
“I have always had the desire to return to my home after my careers as a naval officer and professional pilot. Pam and I moved back to Americus as soon as we could and the welcome we have received has been very heartwarming. In all my travels around the world, I have never known a more caring, honest, and hospitable group of people with genuine concern for others.” Smith said. “I have had the opportunity to serve my country and now it is time to serve the citizens of Southwest Georgia.”
Smith is an active member of First United Methodist Church where his family has worshiped for over 100 years. He is the secretary and program chairman of the Americus Kiwanis Club. He is also a member of the Sumter County Development Authority, Sumter Solar Initiative, Sons of the American Revolution, Sumter Cycling Club, Friends of the Rylander, Sumter Historic Trust, Georgia Conservancy, and Flint River Keepers. Smith also serves on the 2nd Congressional District Service Academy Selection Board.
“The needs of Southwest Georgia have been subordinated to the Atlanta metropolitan area too long and we need an aggressive and effective representative to present our concerns. Unfortunately our district does not have a member on the House Rural Development Council so I will ask for that assignment to affect change in education, healthcare, workforce and job development, and expansion of broadband for the citizens of our district,” he said.
“We need a fresh start and a new brand of leadership, not business as usual. With my experience in the real world, I understand how to make meaningful contacts and deal with the issues that impact our families, our businesses, our communities, and our state. I will give you frequent feedback on what we are doing in the legislature. You will be able to communicate with me anytime so that I will know what you think about the issues and what you think we need to do. I am not a career politician and am not beholden to any group or political leader. My obligation is and will only be to my constituents. My children are raised, my aviation career is over, and now I want to serve you as your full-time representative in the General Assembly.”