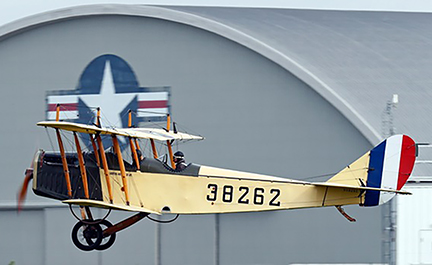 This airplane is a Curtiss Jenny, like the one that Charles Lindbergh purchased at Souther Field and learned to fly here. His first solo flight was in May 1923.

AMERICUS — Although much is known and written about Charles Lindbergh’s purchase of a surplus Curtiss Jenny airplane and his first solo flight at Americus’ Souther Field, far less is mentioned about the very reason that those events could ever have taken place.
Carved out of a peach orchard in 1918, Souther Field was Georgia’s only World War I Army Air Service training field. Officially opened on the 4th of July in 1918, the airport will celebrate its centennial this year. There are few airports anywhere that can claim the Centennial distinction. Even more significant is that Souther is the only one of 32 World War I Air Service training fields that still exists as an operational airport.
Fully aware of this uniqueness, a group has begun planning a centennial birthday party for Souther Field. Last week members of the Americus-Sumter County Airport Authority, Souther Field historian Mike Cochran, and other community groups met to start that planning process.
Initial thoughts are for a weekend event, probably in October that may have the largest gathering of flyable World War I (the Great War) aircraft seen in recent years. These airplanes are extremely rare and seldom are any seen in flight.
Since Souther also served as a World War II training base operated by Graham Aviation, flying examples of these aircraft will also be invited to attend.
In addition to aircraft, additional exhibits that tell the story of aviation across the century are also planned. Currently they include a replica of Georgia’s first airplane. Built by Ben Epps in Athens, the original first flew in 1907. In addition, artifacts of the Great War including an original aircraft engine, photos and other unique items will be shown.
It is hoped that individuals and families in the Americus Sumter area may know additional bits of the Souther Field history, or have had ancestors that worked or served there, and may even have old photos, letters or other items that tell of those early days. If you believe that you may have information that you can share with us, please contact Beth Alston at the Americus Times-Recorder at 229-924-2751 or Marty Steiner at 229.292.6335.
If you are associated with, or know of any group that would like to assist in this planning effort, or be part of the celebration, also please contact Alston or Steiner, the planning coordinator.
The “Souther Centennial Aero Event” will also be listed as an official Georgia World War I Centennial Commission event. This commission, created by the state legislature and appointed by Gov. Deal, is to properly recognize Georgia’s role in the “Great War” as it is known.
Other area groups and sites with World War I significance are also developing events to recognize the World War I Centennial.
Help Souther Field soar into its second century!