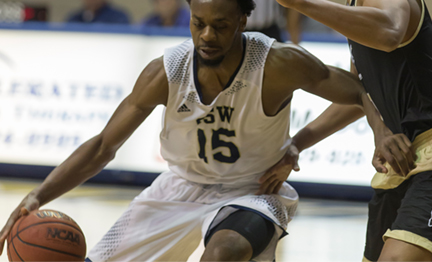 GSW Senior forward Hasaan Buggs scored 18 points against UNC Pembroke in his final game as a Hurricane. Photo by GSW

PEMBROKE, NC – For the GSW Men’s Basketball Team, the season came to a close Wednesday night, February 28, as second-seeded UNC Pembroke defeated the Hurricanes 70-54 in the opening round of the Peach Belt Conference Tournament.

The Braves, ranked 24th in the nation in the NCAA Division II Top 25 rankings, improve to 24-5 overall and move on in the PBC Tournament. GSW finishes the season at 13-14 overall.

The Braves scored the first seven points of the game and never gave up the lead. GSW trailed 36-22 at the half. The Hurricanes struggled to hit shots from beyond the arc, shooting 18.2% in the first half.

The Hurricanes were able to make a final push. Senior Hasaan Buggs drew a charge and scored back-to-back layups to bring GSW to within five. However, in the second half, Buggs was injured and had to leave the game. This gave the Braves the opportunity to extend their lead again. They did so by going on an 8-0 run to put the game out of reach.

UNC Pembroke outrebounded the Hurricanes 40-26 and they held GSW to just 28.6% shooting from three-point range for the game.

Buggs scored 18 points, grabbed five rebounds and dished out four assists in his final game in a GSW uniform. Two other Hurricanes were in double figures. R.J. Sessions scored 14 points and Andre Statam scored 10. The Braves were led in scoring by Akia Pruitt with 15 points on 7-of-9 shooting.