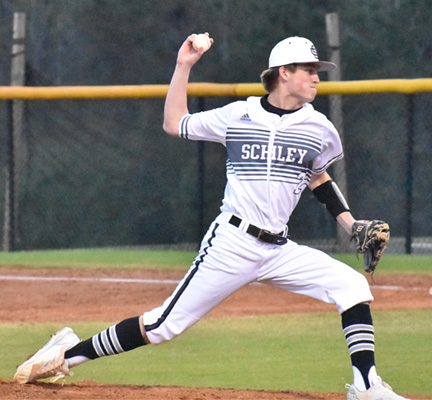 ELLAVILLE – Schley County centerfielder Ashton Goodin belted a grand slam home run in the bottom of the third inning to help lead the Wildcats to a dominating 17-4 win over Georgia Military College on Monday, March 5, at Schley County High School.

With the Wildcats leading 6-2 going into their half of the third, the grand slam was part of a seven-run inning which blew the game open and put it out of reach.

“We did a pretty good job of hitting the ball tonight. Their first guy struggled with the strike zone a little bit,” Schley County Head Coach Chuck Cheek said. “He throws hard. He’s a really good player…just couldn’t find it. We had a pretty tight strike zone tonight. Both of the pitchers had a little bit of a difficult time early getting adjusted to it. I thought that our guys showed some patience at the plate…just good swings on some pitches and we hit a few balls out tonight. That’s always fun. It gets a lot of momentum going for us.” Coach Cheek went on to say that he thought that his pitchers threw well, but that his club still needs to get better defensively. The GMC pitcher that Cheeks was referring to was Corey Bivins. Bivins worked two innings, giving up six runs. He was lifted in the bottom of the second by Ryan Barsby, who moved over from centerfield.

Georgia Military jumped on the board first. They scored two runs in the top of the first. However, Schley County responded with four runs in the bottom of the first. Jordan Hall led off with a walk, followed by a double by Cameron Vanlerberghe. After Cameron Belcher struck out, both Wade Law and Chance Hollomon reached on a walk. Hollomon drove in a run on the walk. After Ashton Goodin struck out, Dylan Taylor walked, driving in another run. Then Lorne Barineau singled, driving in two RBIs.

Schley County Starting Pitcher Garrett Peavy retired the next three batters in order in the top of the second. The Wildcats scored two more runs in their half of the second inning. Jordan Hall led off the inning with a double, then Vanlerberghe homered to give the Wildcats a 6-2 lead.

GMC threatened tin the top of the third, but weren’t able to score any runs. 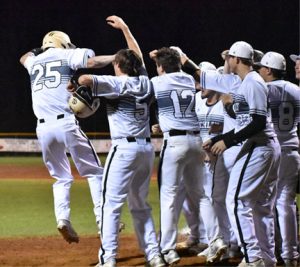 The Wildcats blew the game open in the bottom of the third inning, scoring seven runs, including the grand slam home run by Goodin. The Bulldogs were able to score two runs in the top of the fourth, but that would be all the scoring they would do.

The Wildcats scored four more runs in the bottom of the fourth. GMC would get two men on in the top of the fifth, but Schley County’s Trent Bivins was able to retire the next three batters to end the game.

Several Wildcats had a good day at the plate. Jordan Hall went 3-for-3 with an RBI. Cameron Vanlerberghe went 4-for-4 with a double, a two-run home run, and two singles. He drove in a total of three RBIs. Ashton Goodin drove in a total of five RBIs with the grand slam in the third and an RBI double in the fourth.

Garrett Peavy started the game on the mound for the Wildcats. He allowed only two runs, those coming in the top of the first. Lorne Barineau and Trent Bivins also pitched for Schley County, they both only allowed a total of two runs combined.

“There’s always something that we can work on to get better,” Coach Cheek said. Cheek went on to say that his club has a big region game on Tuesday, March 6, as they host Taylor County. The Wildcats are now 5-1 overall and 3-0 in Region 4-1A play. Weather permitting, the first pitch against Taylor County will be at 6 p.m. If it is postponed due to rain, it will be rescheduled on Wednesday, March 7.