GSW Baseball gets swept by Flagler 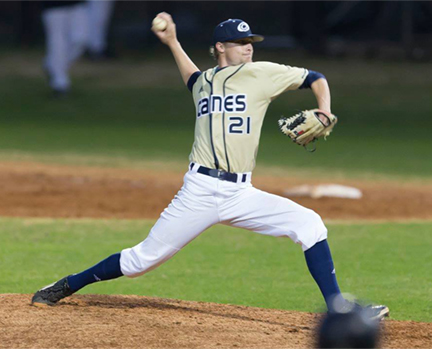 ST. AUGUSTINE, FLA – After dropping the first two games against Flagler on Saturday, March 10, by the scores of 5-3 and 4-2, the Georgia Southwestern State University Baseball Team was hoping to salvage a victory. However, it was not to be as Flagler won Game 3 by the score of 8-2.

Flagler is ranked 25th in the nation in the NCAA Division II Top-25.

GSW’s Andy Moore led the Hurricanes at the plate over the weekend with five hits. Jared Jones and Jason Baita each had a total of four hits.

GSW starting pitcher Kyle Britt had a brilliant outing on the mound in Game 2. Britt held the Saints to one run over three innings.

Georgia Southwestern State is now 3-15 overall and still winless in the Peach Belt Conference at 0-12.

In Game 1, the Saints scored a run in each of the first four innings to take a 4-1 lead into the seventh. The top of the seventh started out well for the Hurricanes as Devin Shea led off with a walk. Baita followed with a double, and Kole Clark hit a sacrifice fly, scoring Shea. At that point, the Hurricanes only trailed 4-2. Then Jared Jones singled, scoring Baita, then advanced to second on a throwing error.

After Flagler made a pitching change, Moore singled, but Jones was held up at third base. Jonathan Martin drew a walk to load the bases with one out. GSW trailed 4-3 at that point, but that would be as close as they would get. Flagler was able to get out of the inning on a strike out and a ground out.

The Saints added an insurance run in the bottom of the seventh. That was all the scoring they needed to win the game. Baita went 3 for 4 with a pair of doubles to lead the Hurricanes’ offense.

Game 2 started off well for the Hurricanes. They grabbed an early lead in the top of the first as Jones doubled down the left field line, scoring Baita. Dakota Long then ripped a double and eventually scored to give GSW a 2-0 lead.

Starter Kyle Britt pitched a terrific game to put the Hurricanes in a position to upset the Saints. Britt retired Flagler in order twice over his eight innings of work on the mound. He didn’t allow a man past second base except for a run that scored in the fourth inning. Britt only walked one and struck out two.

Despite Britt’s efforts, the Hurricanes were done in by a three-run walk-off home run by Flagler’s Ethan Crout with one out in the bottom of the ninth.

In Game 3 on Sunday, March 11, Dakota Long and Andy Moore each had RBI singles in the second and eighth innings. That kept the Hurricanes within striking distance. In the eighth inning, a two-out walk to Jonathan Martin loaded the bases for GSW after Moore singled, but the Hurricanes were unable to capitalize, and the Saints led 3-2 going into the bottom of the eighth.

GSW starter Kyle Spinks held Flagler throughout most of the game, giving up three runs over seven innings. The first two batters that Spinks faced flew out. With two outs and two strikes on the third batter, Spinks got him to swing and miss for strike three. However, the ball went past the catcher, allowing the batter to reach first base.

This was the beginning of trouble for GSW. Flagler scored five runs to put the game out of reach, winning the game 8-2 and sweeping the series.

Andy Moore was the only GSW batter to collect multiple hits in Game 3. He finished 2 for 4 in the game with a double.

The Hurricanes are embroiled in a six-game losing streak. They will try to end the streak when they travel to Montgomery, Alabama on Wednesday, March 14, to face Auburn Montgomery in a one-game, non-conference affair. The first pitch is scheduled

The Methodist Home in Americus Presents the Home Run…