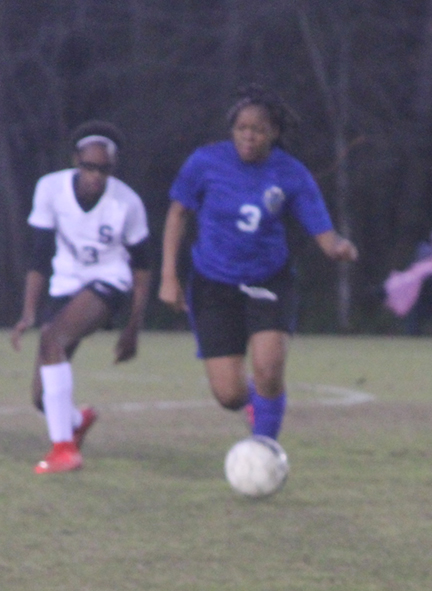 Americus-Sumter’s Chayce Pottinger returns to the pitch after recovering from an automobile accident. Photo by Ken Gustafson

COLUMBUS – It was a rough night for both the Americus-Sumter girls and boy’s soccer teams. Both teams were thoroughly overmatched and out classed by superior talent on both the Shaw girls and boy’s teams.

For the Lady Panthers, their night ended before the end of regulation as Shaw scored 10 unanswered goals, ending the game on a mercy rule.

The Lady Raiders got hat tricks from two players. Both Cyndee Redd and Jordan Brock each scored three goals, which is known as a hat trick. Bri Spear had one goal and Derijuana Porter had two goals to round out the scoring.

In spite of the lop-sided defeat, ASH Head Coach Joseph Oyenia felt his team did better than their previous trip to Columbus, when they were beaten by Hardaway. “We played better than we did last time,” Oyenia said.

As for the ASH boys, it wasn’t much better as the Raiders dominated the Panthers 11-1, ending the game on a mercy rule. Shaw’s Jimmy Barrera scored a hat trick and Yorsin Morales scored four goals on the night for the Raiders. Barrera scored his first goal in the first half to give Shaw a 1-0 lead. However, the Panthers were able to tie up the match when Jose Ovando sent a long ball over the top of the Shaw defense to Montavious Nedd. Nedd controlled the ball and was able to slip it past the on-coming Shaw goalkeeper for a goal, tying the match at 1-1.

However, that would be the only offense of the night for the Panthers. The Raiders responded with seven unanswered goals before halftime. The Raiders added three more goals to end the game in the second half. Shaw’s Yorsin Morales scored four goals, Cesar Deanda scored two and Adriel Martinez scored the Raiders’ 11th goal to end the game.