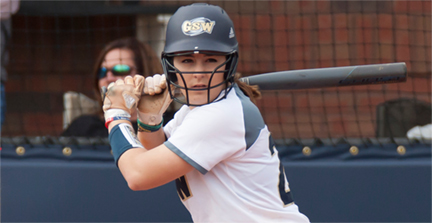 GSW shortstop/third baseman Haley Tierce went 1 for 2 with a double in the Game 1 loss to Valdosta State. Photo by GSW

As a result, the Lady Canes fall to 10-13 on the season, while Valdosta State improved their record to 19-7.

GSW starter Shannon Gibson got a groundout from Jessica Mohl to start the game. However, Gibson hit Taylor Hartenbach. Then Brady Morgan belted a two-run homer to give VSU a 2-0 lead.

GSW answered in the bottom of the first when Mikela Barlow led off with a double. Ansley Dean executed a sacrifice bunt moving Barlow to third. Then Lauren Kuerzi singled, driving in Barlow to give the Lady Canes their only run of the game.

GSW got hits from Hayley Tierce, Elizabeth Wills, Cassidy Burton and Chloe Zoeller, but could not get the clutch hit needed to tie or win the game. It was the third straight game this season that GSW lost to Valdosta State by one run. They fell to the Lady Blazers 4-3 and 6-5 back in February.

In the second game, Valdosta State jumped on the Lady Canes in the second inning when Heather Robinson belted a two-run home run off GSW starter Ansley Dean. The Lady Blazers got to Dean again in the fifth when VSU’s Hartenbach drilled a three-run homer, giving the Lady Blazers a five-run lead. The home run knocked Dean out of the game.

Barlow led off with a single in the bottom of the sixth. Then Dean drew a walk after moving to the designated hitter spot. Tierce followed with a sacrifice fly to right, moving Barlow to third. Barlow then scored on a double from Kuerzi. Wills then brought home Dean with a single, making the score 5-2 Valdosta State.

However, Avery Lamb came in to replace VSU starter Kathryn Carter and got the final two outs to end the threat.

The Lady Blazers added two more insurance runs on three hits off GSW reliever Brittany Childs in the seventh inning to regain the five-run advantage. The Lady Canes made one last attempt to get back in the game in the bottom of the seventh. Childs led off with a single, and pinch-runner KayLynn Church came around to score on a Haley Tierce groundout, but that would be as close as the Lady Canes would get.

After winning eight straight games in February, the Lady Canes have now lost seven of their last eight games. They will try to stop the bleeding when they travel to Milledgeville, GA to take on Peach Belt Conference foe Georgia College in a three-game series on Friday and Saturday, March 16-17. The first two games will be on Friday, March 16. The first pitch of Game 1 is scheduled for 2 p.m.