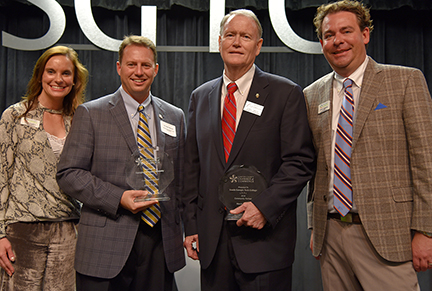 AMERICUS — South Georgia Technical College (SGTC) and Georgia Southwestern State University (GSW) were awarded the Community Partner of the Year Award at the Sumter County Chamber of Commerce’s 98th Annual Dinner and Awards Celebration recently. The banquet was held in the John M. Pope Industrial Technology Center on South Georgia Technical College’s campus and hosted over 200 local leaders and members of the Chamber of Commerce.
The Community Partner of the Year Award is presented to an outstanding partner or partners of the Chamber of Commerce within the community each year. This year, the award was accepted by SGTC Assistant to the President Don Smith and Neal Weaver, Ph.D., president of GSW. SGTC President John Watford, Ed.D., was in Lubbock, Texas, with the SGTC Lady Jets at the National Junior College Athletic Association Division I women’s national basketball tournament. This was the Lady Jets fourth appearance in the past five years and the Lady Jets advanced to the Sweet Sixteen round with an overtime victory over the 10th ranked Casper College Thunderbirds.
“I am thankful for the partnership that South Georgia Technical College has forged with the Sumter County Chamber of Commerce,” said Watford. “We appreciate the support that we receive from the Chamber as well as the businesses and industries in the communities we serve. South Georgia Technical College’s mission is workforce education and it is through partnerships like this one and others that we have been able to accomplish that mission for the past 70 years and look forwarding to continuing this tradition for many more years.”
Sumter County Chamber of Commerce board of directors chair Rhett Simmons echoed the comments expressed by Watford.
“The partnership in our community with South Georgia Tech is integral in promising jobs to the future workforce,” said Simmons. “Over the past 70 years, over 500,000 individuals have benefitted from the services of South Georgia Technical College … They have worked with our community over and over, and have served the workforce not only of Sumter County, but of the world.”
Simmons also spoke on the impact that GSW has on the community.
“Georgia Southwestern is truly an economic driver in our community – the University System listed GSW as having an $89 million impact on the Sumter County region. They employ more than 400 people, with more than 300 of those being full-time and most are Sumter County residents. We couldn’t be the community we are without them,” he said.
The “Two Great Choices – One Great Community” campaign has raised approximately $125,000 over the past ten years. The community has responded positively to the campaign and “Two Great Choices – One Great Community” banners and signs can be seen displayed proudly throughout the local business community. GSW and SGTC’s institutional banners are prominently featured on the light poles throughout the downtown section during special times of the year. The “Two Great Choices – One Great Community” campaign has helped promote Americus and Sumter County as a college town and increased enrollment at both institutions through scholarships. Over 50 students have received scholarship assistance over the past 10 years. 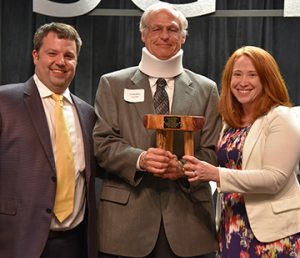 Ted McMillan, center, was the recipient of the One Sumter Visionary Impact Award for his work as chairman of the One Sumter board. Shown with him are Alex Saratsiotis, incoming chair, and Ivy Oliver of the Chamber of Commerce. 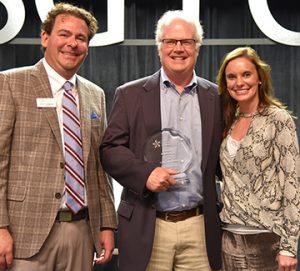 Bill Harris Jr., of Cafe’ Campesino, at center, accepted the Sparky Reeves Sumter Trustee Award. Rhett Simmons and Faiith Pinnell, representing the Chamber board of shown with him.

Mark Butler, Georgia’s Commissioner of Labor, was keynote speaker. His focus was one why employers can’t find eligible workers for the all the jobs in Georgia. Butler said it is lack of soft skills which include 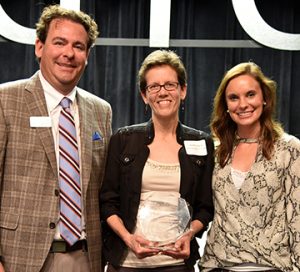 Kay Mournighan, center, owner of Center Stage Market, is the recipient of the Small Business of the Year Award. She is flanked by Rhett Simmons and Faith Pinnell of the Chamber board.

how to speak, how to dress for a job interview, how to be on time, etc., skills that every successful person must possess. Butler said the state department of labor has a program which addresses the lack of soft skills for potential employees.
Sponsors for the meeting were Phoebe Sumter Medical Center, Citizens Bank of Americus, Imerys Aluminates, The Staffing People, Innovative Senior Solutions, Café Campesino, City of Americus, Georgia Southwestern State University,
Golden Gourmet, Magnolia Manor, Middle Flint Council on Aging, PharmaCentra, South Georgia Technical College, and Sumter EMC.