This was a meet in which both GHSA and GISA schools competed in. As far as team results are concerned, the Schley County girls finished in fourth place overall with a total of 68 points, 2.5 points behind Pelham (70.5). Fitzgerald finished runner-up with 103.5 points and the host school, Deerfield-Windsor, one the meet with 112. Southland Academy finished right behind Schley County in fifth place with 62 points, 5.5 points ahead of Bainbridge High School.

As far as the boys’ results are concerned, Schley County finished in fifth place overall with 68.5 points. Southland Academy finished in eighth place overall with 18.5 points. Bainbridge High School blew away the competition, finishing in first with a total of 145 points. Deerfield-Windsor finished a distant second with 106.50 points. “I am very happy with how our guys performed,” Schley County Boys head coach Scott Burgess said. “It is always nice to get a run at Hugh Mills because that is where our area and state meets are held. It is always great to run against good competition and schools of higher classifications such as Bainbridge and Fitzgerald. Schools like Deerfield-Windsor, Southland and Pelham are always going to have good squads every year, so getting to run against them will be a good example of how our region and area meets are going to look as far as competition.” Burgess went on to say that with the region meet just around the corner on April 10, they need to correct some little things which will help them score as many points as possible at the region meet. 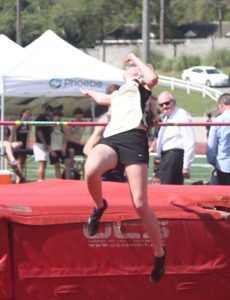 Southland’s Sydney Payne tied for first in the Girls High Jump with Deerfield-Windsor’s Lila Lanier. Both jumped a distance of 4-08.00.
Photo by Ken Gustafson 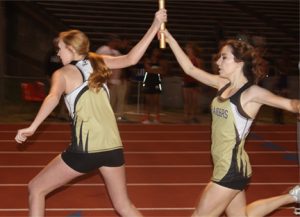 Southland Academy’s Lilli Dickens hands the baton off to her teammate Calyn Fort in the Girls 4×400 Meter Relay.
Photo by Ken Gustafson

Bell and Burrell both did well for Southland in the Girls 1600 Meter Run. Bell finished in second place with a time of 5:44.58, some 14 seconds behind Camryn Bridges of Deerfield-Windsor (5:30.91). Burrell finished in fifth place with a time of 5:57.26. Schley County’s Carmen Philips finished fourth in the Girls 1600 Meter Run with a time of 5:55.15. For her, it was all about the third lap. “I need to work on my third lap. It’s always slowing me down,” Philips said. “Last week, my time was in the 6:20s because of my third lap. I’m supposed to get 1:30 every lap and I got a 1:50 in my third lap last week.” In this race, however, Philips’ finished the third lap in a time of 1:24, enabling her to finish fourth in the competition. 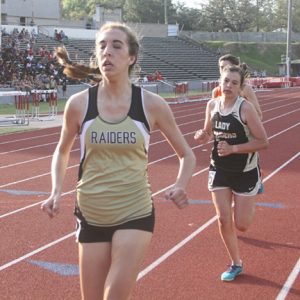 The Lady Raiders also did well in the Girls 3200 Meter Run. Elizabeth Law and Sydney Hayes finished second and third respectively. Law finished in second with a time of 14:13.56, and Hayes finished right behind Law in third place with a time of 14:49.27. “It was my first time running the 3200 Meters,” Law said. “It was definitely an experience. I went out there and told myself to do my best and not worry about what place I came in. If I did finish around the top, then I would be proud of myself and maybe next time, I’ll be able to finish first.” 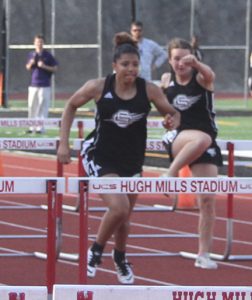 Schley County’s Nyiah Kelley finished sixth in the Girls 100 Meter Hurdles. Her teammate, Megan Harris, is behind her. She finished in ninth.
Photo by Ken Gustafson

In the Boys 800 Meter Run, Schley County’s Noah Hammons and Aaron Pinckard finished in eighth and ninth place respectively. Hammons’ time was 2:17.95 and Pinckard’s time was 2:18.49. Hammons was running the race, having come off ankle surgery. “It was my first 800 Meter race of the year because I was out for the rest of them because of ankle surgery,” Hammons said. “My best last year was 2:08, so 2:17 isn’t bad for the first one back. I’ve just got to get back into running shape.” Pinckard also finished in fifth place in the Boys 1600 Meter Run with a time of 5:07.26. The best Southland finisher in the 800 meters was Morgan Youngdale, who finished in 13th place with a time of 2:23.54.

Davis and Dailey of Schley County finished fourth and sixth respectively in the Boys 300 Meter Hurdles. Davis ran a time of 43.57, while Dailey’s time was 45.29. Southland’s Bennett Carey finished 12th with a time of 47.30, while Clay Owens finished in 16th place with a time of 49.44. 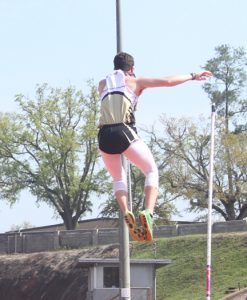 Schley County’s Aaron Pinckard (behind) trying to catch up to Deerfield-Windsor’s Ford Bennett (front) in the Boys 1600 Meters. Pinckard finished fifth in the event right behind Bennett.
Photo by Ken Gustafson

Overall, it was a good day for Southland as well. Head Coach Nathan Hammack was very pleased with how the Raiders and Lady Raiders performed. “Overall, we ran well today. We had some people achieve some personal bests,” Hammack said. “Savannah Banks finishing second in the Shot Put. She threw her best throw of the season.  Brody Shattles clearing 12 feet in the pole vault, Sydney Payne tying for first in the high jump. We performed very well today, and now, we’re getting ready for region.” 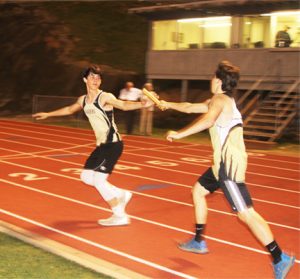 Southland’s Evan Murphy hands the baton off to Nathan Duke in the Boys 4×400 Meter Relay.