ANDERSONVILLE — Flyover of an L-19 aircraft and a UH-1 Huey helicopter will be one of the highlights of events to recognize the 20-year anniversary of the National Prisoner of War (POW) Museum at Andersonville National Historic Site. The Friends of Army Aviation-Ozark will fly the aircraft over the site and then land the helicopter on site for a static display. 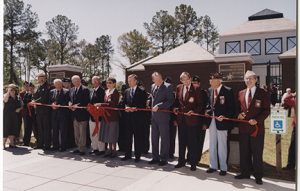 The April 1998 ribbon cutting ceremony for the National Prisoner of War Museum in the Andersonville National Historic Site. Sen. John McCain, a former POW from the Vietnam era, was keynote speaker at the event.

Military and political leaders, veterans, and others will gather to honor former POWs and the 20-year history of the only museum tasked by Congress to preserve and share the stories of Americans held prisoner in service to their country. Distinguished guests include U.S. Air Force Gen. Joseph L. Lengyel, Chief of the National Guard Bureau and member of the Joint Chiefs of Staff; Maj. Gen. Craig C. Crenshaw, Commanding General of the Marine Corps Logistics Command; U.S. Congressman Sanford Bishop; and 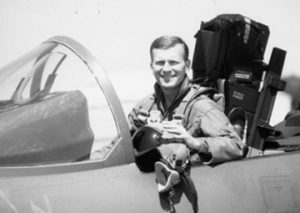 Kathy Burns, Field Representative for U.S. Sen. David Perdue. Former POWs from World War II, Korea, Vietnam, the Gulf War, and Iraq will attend. The American Legion Riders will also attend as part of their 2018 Unity/Legacy Ride.
Former POW speakers will share their experiences. Col. David Eberly (USAF ret.) was the senior allied POW of the Gulf War. Capt. William Robinson (USAF ret.), captured in Vietnam, was the longest held enlisted soldier in American military history. Seymour Lichtenfeld fought as a combat infantryman in World War II and was captured during the Battle of the Bulge. Each will share his amazing and inspiring story.

Maj. Nicholas Holten, Commander of the U.S. Army SERE School, will present a program about survival, evasion, resistance, and escape training. The day’s events will also include performances by the Lee County High School NJROTC Armed Drill Team, the U.S. Army Maneuver Center of Excellence, and bagpiper Colonel Dan Gillan (USMC ret.).
Please join us on Sunday, April 8, as we gather to honor those who endured the loss of their freedoms to protect ours. All events are free and open to the public.