ALBNAY – It was, for the most part, a well-played game between Georgia Southwestern State and Albany State. However, four walks and an error by the Hurricanes in the bottom of the fourth inning proved to be the difference in the Golden Rams coming out on top 6-5 on Wednesday, April 4, at the Albany State West Baseball Complex.

With the loss, the Hurricanes drop to 6-25 on the season, while Albany State improves to 15-13.

Things started out well for the Hurricanes in the top of the first. Jason Baita led off the game with a single. After Josh Logan struck out and Jared Jones hit into a fielder’s choice, Andy Moore singled, driving in Baita for the first run of the game.

However, the Golden Rams responded in their half of the first. Jonathan Cirullo led off with a walk against GSW starting pitcher Stewart Tyler. Kelvin Wimbush hit into a fielder’s choice, then Riliani Familia drove in an RBI single, scoring Cirullo to tie the game at 1-1.

The Hurricanes answered in the top of the second. Tyler Skelton bunted and reached on an error that allowed him to go all the way to third base. After Kole Clark popped out, Dakota Long hit a sacrifice fly RBI to score Skelton, giving GSW a 2-1 lead.

Albany State responded in the bottom of the second. Trey McMillan led off the inning with a double. Then Quantico Dodson-Williams drove in McMillan on an RBI double, tying the game at 2-2.

GSW didn’t score in the top of the third, and the Golden Rams took advantage in their half of the third inning. Trey McMillan singled, driving in Tyler Morris to give ASU a 3-2 lead. An error, a walk and a wild pitch by the Hurricanes were factors in the run being scored.

However, the Hurricanes responded by scoring three runs on five hits in the top of the fourth. Josh Logan drove in an RBI and scored a run. Jared Jones and Andy Moore also drove in RBIs in the inning. At that point, GSW had a 5-3 lead.

Neither team scored any more runs the rest of the way, as the pitchers of both teams were able to hold the offenses in check. The last real threat GSW posed was in the top of the eighth inning. With two outs, Jason Baita singled and advanced to second on a single by Logan. However, Jared Jones hit into a fielder’s choice to end the threat.

In the top of the ninth, ASU’s Trey McMillan came in to pitch. He struck out Andy Moore and Jonathan Martin, then got Tyler Skelton to fly out to end the game.

GSW centerfielder Josh Logan at the plate. He went 2-for-5 with an RBI and scored a run.
Photo by Ken Gustafson 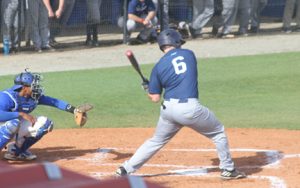 GSW catcher Dakota Long at the plate. He went 2-for-3 with an RBI and scored a run.
Photo by Ken Gustafson

The Hurricanes will step back into conference play with a three-game weekend series when they host Columbus State (26-6, 10-4 PBC) starting on Friday, April 6 at 5 p.m. Columbus State is currently in third place in the PBC standings behind Flagler and Georgia College. The two teams will play a doubleheader on Saturday, April 7. Game 1 begins at 1 p.m., followed by Game 2 at 4 p.m.

After this weekend, the Hurricanes have one final home game on Wednesday, April 11, when they take on Tuskegee University at 5 p.m.