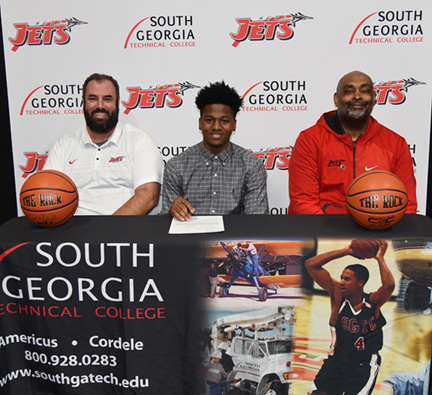 “Mike is a great addition to the Bronco family,” Fayetteville State head coach Ken Spencer said. “We are expecting him to come in and contribute right away. I know he is coming from a good program, being coached by Travis Garrett, so he is prepared for the tough competition that he will face in the CIAA. He is a good student-athlete, a good person and he is tough. That is everything I look for in a good guard.”

Spencer will be starting his second season at the helm of Fayetteville State. Las t season, the Broncos finished 10-19 overall, but reached the second round of the CIAA Tournament before falling to Johnson C. Smith 68-58.

“This is a good fit for Mike Boone,” SGT head coach Travis Garrett said. “This is close to home for him and he will be able to go in and contribute and make a difference. We are very proud of him and wish him the best as he continues his education and his basketball career.”

Boone helped lead the Jets to a 20-12 record in the 2017-18 season and a second-place finish in the NJCAA Region XVII Tournament in Rome, GA.

Boone averaged 10.9 points per game for the Jets and started 22 of 26 games that he played in this past season. Boone shot 41.5 percent from the field, hit 40.9 percent of his three-point attempts and was a 77 percent free throw shooter.