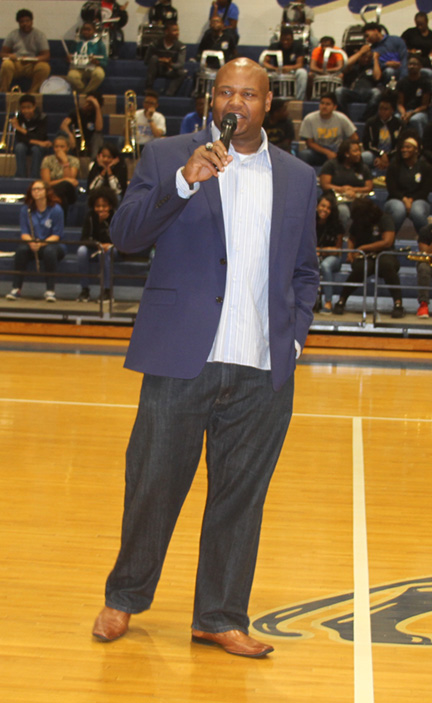 Then, after the band played and the cheerleaders performed, it was time for the man of the hour to take the stage: Coach Larry Harold. Coach Harold began by saying that he thanked God for the opportunity to be at Americus-Sumter, and he also thanked his family for their support. He then went on to talk about the vision and goals that he had for the football program. “I would like to see Americus-Sumter become a nationally recognized program,” Harold told the crowd. “Everybody has to come together. It just can’t be the players and the coaches. Everyone in the community: the middle school, elementary school, everyone has to buy into the vision.”

Coach Harold gave one example of how people can volunteer their time and effort toward the cause. “If you have a trailer, or if you’re able to get one, we need trailers to haul the equipment,” Harold said. Coach Harold went on to say that his goal is teach his players not only the skills of football, but to make sure they get a good education so that they can go on to college. “We have gold here, future CEOs, people who can work for Fortune 500 companies,” Harold said about his players. He told the crowd assembled that he would like to see a lot of his players get football scholarships so that they can get an education and be successful in life. He talked about the importance of keeping his players in an environment of football that will keep them away from the negative influences of drugs and other things that can lead them down the wrong path. He also mentioned that he and his coaching staff not only want to stress to the players the importance of education and football, but also having God in their lives.

The most important thing that Coach Harold stressed to the crowd assembled at the Americus-Sumter gymnasium was that the entire community has to buy into the vision. “We cannot dwell on the past,” Harold said. “We have to move forward. Everybody has to buy into the vision” He said he plans to have alumni events where he will invite back the state championship teams from 1944 and 1962.

According to ASH Athletic Director Coleman Price, he and Coach Harold have discussed having various theme nights during the 2018 season where they would like to honor members of these teams before or after the game. They also discussed having a “Hometown Hero” Night, in which someone from the community who has done extraordinary work will be honored before or after the game.

As the time for the Meet & Greet came to a close, Coach Harold asked everybody to stand up. “I’m going to say the word ‘everybody’ and I want you to reply ‘Go to work’,” Harold told the crowd. He then shouted “Everybody.” The crowd shouted back “Go to work.” This happened about three or four times.

Harold went on to say that Spring Practice would begin on Tuesday, May 1. He also mentioned that there will be an inter-squad game on Saturday, May 5. Coach Harold said that entrance is free, but that he would like those who attend to bring peanut butter and jelly sandwiches and detergent to assist the team. On Friday, May 11, ASH will host a Spring game against Southwest Macon at Alton Shell Stadium at 7 p.m.

According to Price, Coach Harold plans to have the team attend several camps over the Summer: one at the University of Georgia, one at Jones County High School, one at Greater Atlanta Christian and one at Spalding County. These are camps in which several high school teams will come to hewn their skills. Americus-Sumter also plans to host its own camp as well. 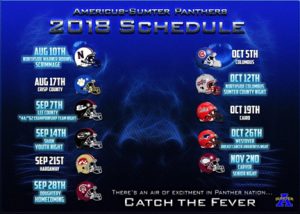 To begin the season, there will be a scrimmage at home on Friday, August 10, against Northside-Warner Robins. Then it begins for real the following Friday night, August 17, when the Panthers travel to Crisp County. Their first regular season home game will be against Lee County on Friday, September 7th. That night is planned to be 44 and 62 Championship Team Night, in which the 1944 and 1962 state championship teams will be honored. Other theme nights will be Youth Night against Shaw on Friday, September 14, Sumter County Night on Friday, October 12 against Northside-Columbus, and Breast Cancer Awareness Night on Friday, October 26 against Westover.

Monday night’s Meet & Greet got the students, parents, faculty and the community excited about the new era of Americus-Sumter Football. It was a great way to kick off the upcoming season.