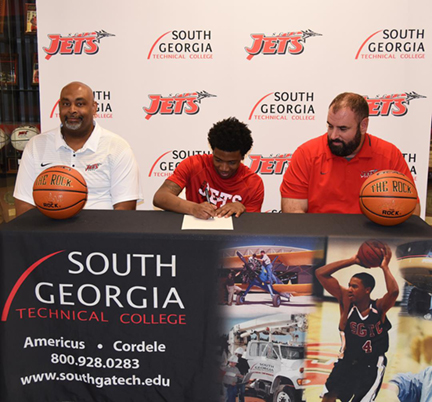 SGT Jets head coach Travis Garrett is shown above (l to r) with Rico Simmons, who is signing a letter of intent to play basketball at Mississippi Valley State University, and Jets assistant coach Chris Ballauer. Photo by SGT

“I am very proud of Rico Simmons,” SGT head coach Travis Garrett said. “When Rico came to South Georgia Tech, he had to goals: He wanted to earn his associate degree and also have the opportunity to continue his basketball career at an NCAA Division I school. Both of those dreams came true today.”

Coach Garrett has led several other ball players and former Jets to the Southwestern Athletic Conference. They have all had good success at the four-year level and he expects no less from Rico Simmons.

The 6’9 guard from Wilkinson County, Georgia was a standout player for the Jets during his time at SGT. Simmons was selected as one of the most valuable players for the Jets his sophomore season. SGT posted a 20-12 overall record and finished second in the National Junior College Athletic Association (NJCAA) XVII Tournament during the 2017-18 season.

Simmons was the GCAA Freshman of the Year in 2015 and the MVP for SGT. He sat out the 2016-17 season, but returned for the 2017-18 season, leading the Jets in scoring with 16.3 points per game. He was also selected as the GCAA Player of the Week for that accomplishment.

Mississippi Valley State finished the 2017-18 season with a 4-28 record and posted a 4-15 record in the Southwestern Athletic Conference. They advanced to the SWAC quarterfinals this past season.

“I am excited about this opportunity,” Simmons said. “Mississippi Valley State University did not have a great record this season, but I am hoping that means that I can come in and have an impact and help change that. This is something that I have dreamed of doing all of my life.”