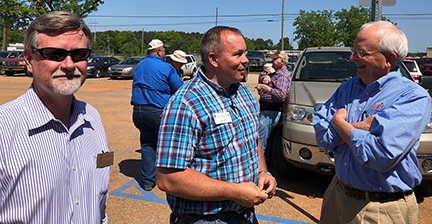 AMERCUS — A large crowd attended the official ribbon-cutting at the Sumter County Stockyard Monday which featured a hamburger lunch and agriculture dignitaries from the local area all the up to the state’s top ag guy — Georgia Agriculture Commissioner Gary Black.
Randy Howard, chair, Sumter County Board of Commissioners, welcomed everyone, commenting that the newly refurbished sales barn was paid for with SPLOST (Special Purpose Local Option Sales Tax) revenues.
There were representatives from Sen. Johnny Isakson’s office, and Sen. David Perdue’s office as well as Congressman Sanford Bishop’s office.
Other dignitaries recognized were Sen. Greg Kirk, R-Americus; state Rep. Bill McGowan, D-Americus; former state representative Mike Cheokas; two representatives of the Georgia Secretary of State; Craig Stephens of the USDA, whose late father Fox Stephens once operated the stockyard; representatives of the Sumter County Chamber of Commerce; Anne Chaplin of the Small Business Development office; Gerald Mixon of River Valley Regional Commission; Sumter County Extension Agent Bill Starr; Sumter County Commissioners Thomas Jordan and Clay Jones; representatives of the Georgia Cattlemen’s Association; Sumter County administrator, Bill Twomey; Larry Chitwood and Bernie Merritt, Sumter County employees who updated the facility; Dr. Leanna Wilder, president and CEO of the Sumter County Stockyard LLC; and Sam Still.
Commissioner Black said he would keep his comments brief as the purpose of the day was to sell cattle.
Black quipped that all the buyers’ chairs were the same. Himself a cattleman, Black said he was accustomed to seeing bigger buyers with nice chairs and lesser ones with old, beat-up chairs at cattle sales. He thanked the citizens for allowing him to do his job as state agriculture commissioner. He also gave kudos to Rep. McGowan and Sen. Kirk who voted on his budget, and “it came out good.”
Black talked a little about the GATE (Georgia Agriculture Tax Exemption) which is being revised so that one, three-year card will cost farmers $50 per year, and they will receive a new card every year. He said the program has met with some problems from “big box” stores who do not enforce violations of the cards by people who aren’t eligible to use them.
He also commented on his close working relationship with former Georgia Governor Sonny Perdue, who is now U.S. Secretary of Agriculture. “You all would be proud of Secretary Perdue,” he said. “He’s helping is in many ways.”
Black also said that the state’s beef cattle industry, representing the power of the brand, “Georgia grown,” is a challenge for producers.