ALBANY – It was a good beginning for both the Schley County boys and girls track and field teams as they excelled on day one of the GHSA Class A Public State Meet held at Hugh Mills Stadium in Albany. The meet goes from Thursday through Saturday, May 10-12. The Class 2A and 3A schools are also competing in their state meets at Hugh Mills Stadium during the same three-day period. 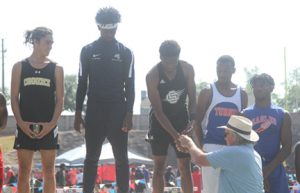 : Jackson Fulks on the podium receiving his second-place award for finishing as the State Runner-Up in the long jump competition.
Photo by Ken Gustafson

Junior Jackson Fulks took second place in the Class A Public Boys Long Jump competition. Fulks had three jumps, and he made his third and final jump a great one, jumping 21-10.00, good enough for second place. He was beaten out by Benjamin Okafor of Elite Scholars, a school in Atlanta. Okafor jumped 22-06.50 to take the Class A Public State Title. “I’m not satisfied. I’m really upset that I got second, but there’s next year,” Fulks said. “I just need to get more elevation on my jumps.” Fulks went on to say that the only way to do that is simply more practice. 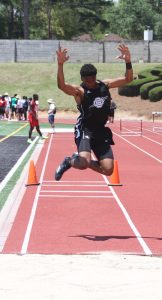 Jackson Fulks finished in fourth place in the triple jump competition. His best jump was a distance of 44-05.00.
Photo by Ken Gustafson

Fulks would have to beat that mark, but was unable to do so. Okafor went on to win the competition by completing his best jump at 46-00.00. Fulks would have to settle for fourth place as Trendarius Henderson of Turner County bested Fulks by two inches, jumping 44-07.00 to take third place. Da’ Quan Jackson of Montgomery County jumped his best distance of 44-10.00 to take second place. Fulks was three inches away from being the state runner-up, but still finished extremely well for the Wildcats.

Senior Peyton Register vaults a height of 10-00.00 to finish on the podium in eighth place.
Photo by Ken Gustafson

In Boys Pole Vault, senior Peyton Register made history for Schley County. He was the first pole vaulter in school history, male or female, to qualify for the state meet and to make on to the podium. Register finished in eighth place (The top eight finishers in each event stand on the podium to receive awards). A year ago, Register was the first pole vaulter, male or female, in school history. 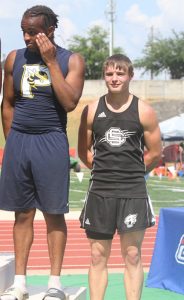 Peyton Register standing on the eighth-place slot on the podium next to Jordan Solomon of Pelham, who finished in sixth place.
Photo by Ken Gustafson

Register’s best jump was 10-00.00. Register, a fierce competitor, wanted to finish much higher. “I could have done better. I’m very disappointed that I didn’t do better,” Register said. “At Southland, I’ve actually hit 10-06, and it’s just one of those things. I’m very disappointed in myself. I know I could have done better.” Register practices at Southland Academy. Register believes that his improvement in the event will come from timing. “It’s a timing thing,” Register said. “It’s like how a quarterback has to time out steps that his running back is going to take before he makes the handoff. It’s like that, but if you miss one step, you won’t make the jump.” 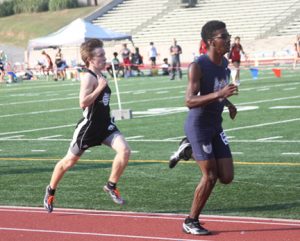 Freshman runner Aaron Pinckard trying to get past Kaleb Dennis of Elite Scholars in the finals of the Boys 1600 Meter Run. Pinckard finished on the podium in eighth place, breaking his personal record of 5:07 with a new record of 4:59.54.
Photo by Ken Gustafson

In the Boys 1600 Meter Run, freshman Aaron Pinckard finished the race in eighth place in a time of 4:59.54, breaking his own record of 5:07. According to Pinckard, he set that previous personal record about a month ago. “The competition was really good,” Pinckard said. “I just tried to stay patient…didn’t let people getting in front of me bother me and just work harder, I guess.” 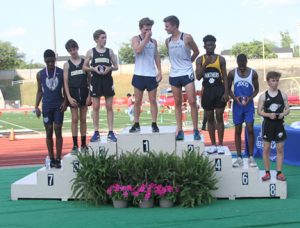 Aaron Pinckard (far-right) stands on the eighth-place slot of the podium.
Photo by Ken Gustafson

For Schley County Head Coach Scott Burgess, the performance of his athletes on the first day of the state meet was pleasing to him, and met his expectations. “I’m very proud. Every guy that competed got on the podium, which is always a goal,” Burgess said. “To be top eight in the state is a big deal. I’m very proud.” 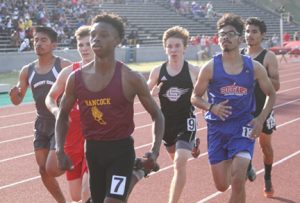 Schley County’s Aaron Pinckard amongst the field of runners in the Boys 1600 Meter Run.

The GHSA Class A Public State Meet continues Friday, May 11, and Saturday, May 12.