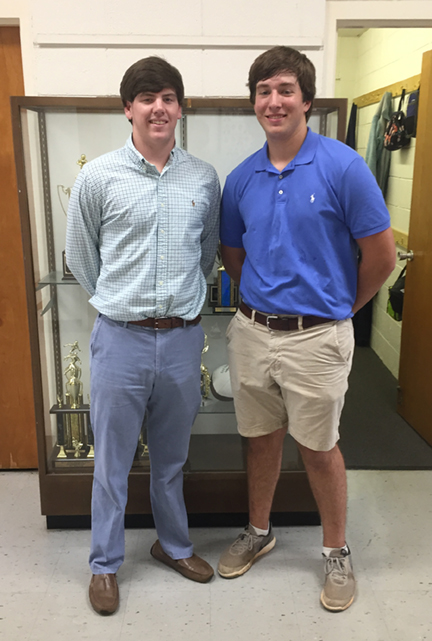 The award goes to a high school male or female athlete who exemplifies these characteristics: optimism, an encouraging spirit, servant leadership, a heart for others, admits imperfections, always gives 100 percent and puts his or her team first. High school athletes all across Georgia have been nominated and have received this award. The award was founded by former Pittsburgh Steeler Super Bowl XL MVP and University of Georgia standout football player Hines Ward. The award is given out to high school athletes representing each sport in all regions of the state. Harrison Bell won it for Boys Cross Country and Chandler Studdard won it for Boys Basketball. Both Bell and Studdard were recipients for the West Georgia Region.

“It’s an award that we were nominated for by our coaches,” Studdard said. “They selected us to go in this group. It was like a prize and we both won.”

Studdard, the son of Todd and Dee Studdard, is an excellent student and excels in football, basketball and golf for the Raiders. For him, to be honored with this award is an extremely special thing. “It’s a great honor,” Studdard said. “I think we were well-deserving of it. We work hard and we try to lead our team in every way possible,” Studdard continued. Senior Harrison Bell, the son of Chad and Angie Bell, was the other recipient of the award. Bell is also an excellent student and a standout athlete for the Raiders in baseball, basketball and cross country. “It’s more than just playing the sport and leading the team. It’s also being an example off the field or off the court. You have to be an example in the school and be positive in any circumstances,” Bell said. Bell has signed a scholarship to play baseball at the University of South Carolina-Beaufort. As far as positive activities off the field and court, Bell has been extremely active. Bell and his family are active members of Central Baptist Church here in Americus. “I do a bunch of stuff with my church,” Bell said. “One Summer, we went to New York for a mission trip, which was really fun. I would like to do that again if we get the chance. I also do a lot of stuff for the school…helping them with basketball camps and just being around younger kids and being an example to them as much as possible.”

Chandler Studdard has also done a lot of service work off the field and court. He loves to be involved in the many sports camps that Southland has during the Summer. Studdard and his family are active members of Bethel Baptist Church here in Americus. “Every Summer, I help out with a bunch of mini camps for kids,” Studdard said. “I’m out here non-stop. I basically live out here. We’re out here all Summer and all school year. I love this place. I love it a lot. I do a lot of stuff for it.”

Both Bell and Studdard started sports at a very young age. “I started playing sports when I could start walking,” Studdard said. “I’ve had a ball in my hands since I was about born. I’ve always loved it.” Studdard went on to say that both his family and Bell’s family grew up playing sports together. For Bell, it’s pretty much the same story. He started since Day 1. “Ever since I was born, I’ve been at it carrying a baseball bat around, or trying to hit anything that looked like a ball,” Bell said. “I do remember one thing. My great grandad and I use to play baseball in the living room. My bat would be a wooden spoon. It was so much fun. I was probably four or five years old,” Bell continued. For Studdard, he remembers an experience involving sports at around two or three years of age. “When I was little, my grandmother use to throw the football with me when I was about two years old,” Studdard said. “She and I would go out into the front yard. She’s 60 years old and we’d be throwing. Those were good memories. I was about two or three years old catching the football.”

Both Bell and Studdard would like to encourage young athletes who are coming up into high school to focus on more than just practicing their skills and being the best at a certain sport. To them, it’s much more than that, and the rewards are worth it. “It’s rewarding being a leader and helping other people out with a certain sport, or not even just sports, in class work,” Bell said. “Just helping them and see a positive outcome come out of that, and to see the smile on their face is the best feeling in the world,” Bell said. Studdard pretty much echoed Bell’s sentiments. “He (Bell) and I agree with a lot on a lot of stuff,” Studdard said. “I just say, ‘Lead by example.’ That’s what I always say. You’ve got to work. There’s so much work we have to put in to doing all this.” Studdard went on to say that Bell was a great leader for the basketball team as a senior, and had a great outlook. “Lead by example,” Studdard said. “All of these little kids out here, I mean, you want the future to be good at Southland. Once we’re gone and graduated, we want them to have what we had. I’ve been blessed,” Studdard continued.

Studdard went on to say that Southland will host football, basketball and baseball camps throughout the Summer. Studdard says that after he graduates from college, he would like to be a banker or go into Business Management. Studdard played Defensive End and Tight End on the Southland Football Team. He plans to take football recruiting visits to Kennesaw State, Valdosta State and Georgia State. As for Bell, he also wants to go into Business. “When I graduate from college, I either want to do Business Management, or something like Accounting, something dealing with numbers,” Bell said.

Both Harrison Bell and Chandler Studdard have shown positivity to their teammates, coaches, teachers and classmates at Southland Academy. They have also given back to their community. They are both well-deserving of this honor.