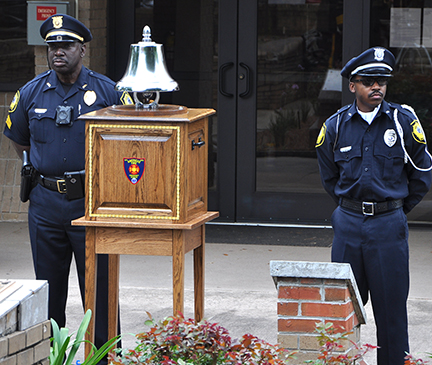 AMERICUS — Several law enforcement officers from the City of Americus, the Sumter County Sheriff’s Office and Georgia Southwestern State University, as well as the families of recently slain officers, gathered on Tuesday, May 15, outside the Russell Thomas Jr. Public Safety Building for a the inaugural Peace Officers Memorial Day Ceremony to remember all of the Americus and Sumter County police officers, dating back to 1839, who had lost their lives in the line of duty.
In 1962, President John F. Kennedy designated May 15 as Peace Officer Memorial Day, and the week in which that falls as National Police Week.
“This is our first annual police officers’ memorial celebration. We will be recognizing the officers that lost their lives in the line of duty, dating back as 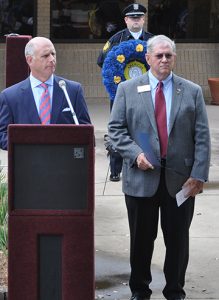 Americus Mayor Barry Blount, at podium, and Sumter County Board of Commissioners Chairman Randy Howard read proclamations at the ceremony.

far back as the late 1800s,” said Col. Eric Bryant, chief deputy of the Sumter County Sheriff’s Office. “This is the first event that we hope to continue on an annual basis,” Bryant said. “It gives us an opportunity to reflect and remember the officers that have given the ultimate sacrifice, that have given their lives for public safety here in Americus and Sumter County. Today, we will not only reflect and show strength for their families, but at the same time, show a sign of unity for public safety here in Americus and Sumter County.”
Bryant said they would hope that having Peace Officers Memorial Day celebrations like this one will show the community that as a public safety group of individuals, police officers come together and celebrate the good and the bad. “We are a strength of sisters and brothers, striving for service of the people here in Americus and Sumter County,” Bryant said. “The message that we hope to send to the community is that despite the negatives that happen, despite the negatives that are around us, we still stand strong and very proud and able to serve and protect.” 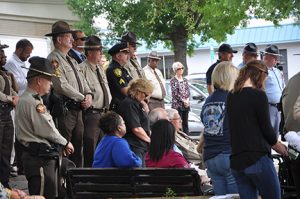