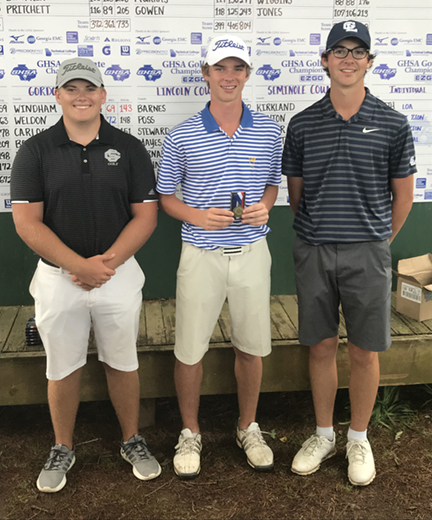 ELLAVILLE – The Schley County boys and girls golf teams had a strong showing at their respective state golf tournaments. The girls played the state tournament at the Preserve Course at Lake Oconee, while the boys competed at Double Oaks Golf Club in Commerce, GA.

The Lady Wildcats’ team of Bethany Hall, Brooklyn Hancock, Amanda Murray and Preslee Owen finished in eighth place with a two-day score of 505. The scoring is made up of the best two rounds for each day. On day one, the two counting scores were shot by Hall and Murray. On the second day of competition, the two counting scores were posted by Hall and Hancock. The Lady Wildcats qualified for the state tournament by finishing second in Area 1. 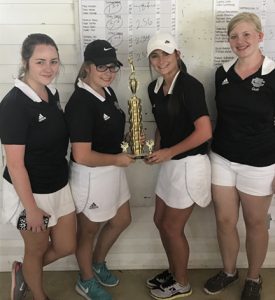 The Schley County Girls Golf Team: left to right: Preslee Owen, Brooklyn Hancock, Bethany Hall and Amanda Murray after finishing second in the Area 1 Tournament, which qualified them for state. They finished eighth in the state tournament.
submitted photo

In the boys’ competition. The Schley County boys team of Thad Clark, Bryce Collins, Grayson Crews, Jackson Kiff, Scott Morris and Parker Munn finished in second place in the state with a two-day score of 646. The scoring is made up of the best four rounds for each day.

The day one total of 320 was good enough to finish the day in second place just eight strokes off the lead. Schley County shot 326 on day two to close with a two-day score of 646. This was eclipsed only by Gordon Lee, who shot a 312 and 300 for a two-day total of 612.

The Wildcats were clear of third place by 25 strokes over Towns County’s 671. The boys qualified for the state tournament by winning the Area 1 Championship. 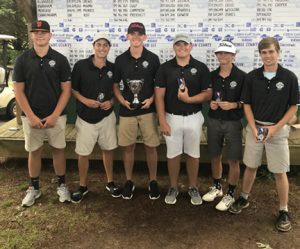 As far as individual performances were concerned, Thad Clark finished in a three-way tie for Low medalist and took home state championship honors with a -1 par 143 (74/69). The -3 69 score on day two set a new school record. Clark was tied for the lead after day one with two other golfers, and was able to keep pace on day two.  Clark was even par through the front nine and one off the lead. He was able to shoot a 3 under 33 on the back nine to tie for the championship. A key 15-foot birdie putt on the 36th hole made the difference, sealing his spot atop the leader board.